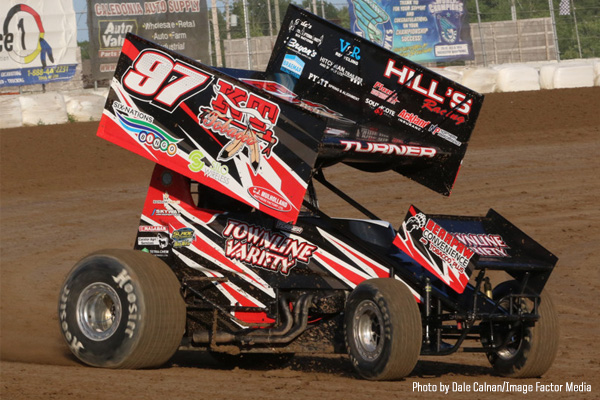 CAISTOR CENTRE, Ont. – June 19, 2017 – Cory Turner was handed a tall task during 360 Sprint Car action at Ohsweken Speedway on Friday night, but the Casitor Centre, Ont. driver was up to the task and drove his KT Tobacco/Silo Wireless No.97 to its fifth top-five finish of the season.

Turner started the night with a tough draw that forced him to start dead last in ninth for his qualifying heat. He raced forward two spots to seventh, but wasn’t able to qualify for the redraw.

“I wasn’t good in the heat race,” Turner said. “I knew before I started that ninth to fifth would put me in the redraw for sure. I got over the cushion in turn one and I almost got on my lid.”

Fortunately, Turner kept his car upright and was able to start tenth for the 20-lap main event. The changes the team made between the heat and the start of the main event gave Turner the boost he needed for the main event.

“I got lucky because it seems the outside row on the start is going a lot quicker than the inside row,” Turner said. “If you start 10th or 12th, you can get two guys by the time you’re out of turn two, so I feel like starting in the outside lane is an advantage.”

The early race advantage allowed Turner to track down and pass a number of cars before engaging in an exciting battle for fourth with Mikey Kruchka just past the halfway point.

“I was running the top and there was nothing at all on the bottom so if you wanted to pass guys you had to slide them,” Turner said of his pass on Kruchka. “I had a good race with Mikey and I thought I had him, but he just gave it to me in turn one. I had a feeling that was coming and I needed to cross him back over and get back to the fence, but I couldn’t get a good enough run off the bottom.”

After four nights of competition at Ohsweken, Turner sits third in the championship standings, just 17 points behind leader Dylan Westbrook and 15 back of Jim Huppunen for second.

“It’s almost the end of June and we’re third in points, less than 20 out of the lead,” Turner said happily. “You can’t win in the first four weeks of the season, but you can lose it. Its kind of life a golf tournament.”

Turner has a busy week ahead of him with Ohsweken back in action on Friday, June 23 before taking on the Lucas Oil Empire Super Sprints at Merrittville Speedway, a track Turner previously called home, on Saturday, June 24.

“I’ve been watching some of the videos from Merrittvile the last couple of weeks and it looks like it’s just been slick and smooth, which is always how it is when the Sprint Cars get there,” Turner said. “We were really good there back in April when we had a shot at the win and ended up running third. I see Merrittville really well because I have a lot of laps there. I think we’re going to be good again.”

For additional event information on both events, visit www.ohswekenspeedway.com and www.merrittvillespeedway.com.