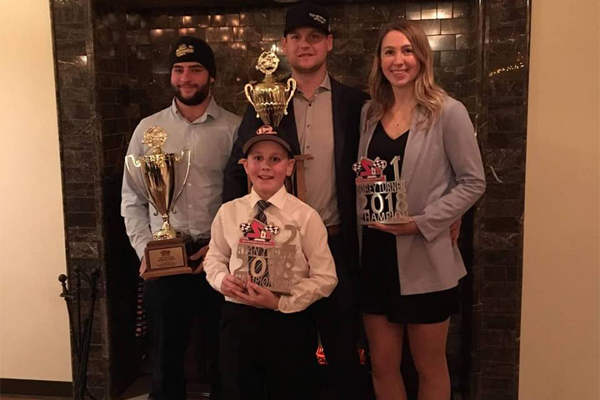 CAISTOR CENTRE, Ont. (December 3, 2018) – Cory Turner officially brought his 2018 season to a close with a pair of banquet celebrations during the month of November where he was officially crowned the 2019 Southern Ontario Sprint champion while also accepting accolades for finishing third overall in Ohsweken Speedway’s weekly point standings.

“It was by far our most successful season in a Sprint Car,” Turner said. “We were extremely fortunate to have Miles, Pam and Alex as car owners for the past three seasons. They run a top-notch program and got us to another level with the quality of their equipment and the knowledge that they have in their shop. We are going to miss seeing them day in and day out and can’t thank them enough for the opportunity they gave Nathan Jackson and myself working with them and their crew. They were more than excellent car owners for us during our time together and we had a lot of fun with them at home as well as on the road.”

“I also have to thank Daryl, Trevor, Nate, and of course, my girlfriend Dayna for all of their support. I also have to thank everybody from our Team Turner Racing family too, including Bobby and Peter Turford. We had help from a lot of different people this year, which was great.”

On Saturday, November 24, Turner attended the Southern Ontario Sprints year-end banquet at the Lasalle Yacht Club in Niagara Falls, NY where he officially received his championship hardware. With the SOS, Turner had one win at Brighton Speedway on July 7 and six top-five finishes in eight races.

“We had a really good year. Our worst finish on the tour with the SOS was sixth and that’s ultimately what got us a championship,’ Turner explained. “We were definitely fast at times, but when we weren’t the fastest car we finished the race.”

Turner’s Crew Chief, Nathan Jackson, also earned the series’ Crew Chief of the Year award for his hard work that helped propel the team to the title.

“Nate wasn’t expecting the award, so he was pretty excited,” Turner added. “It was a nice feather in his cap after a good season.”

The SOS title was Turner’s first championship of any kind, he said.

“It went right down to the wire in Thunder Stocks one year at Ohsweken and Humberstone and it didn’t work out,” Turner said. “This time it all worked out and we had a good time doing it. We work hard on our racecars, but we always make sure we have fun too.”

With the 2018 season now in the rearview mirror, Turner is looking ahead to the 2019 campaign. Turner will not return to Hill’s Racing in the new year in order to pursue another opportunity to be announced in the coming weeks.

“We really appreciate everything Miles, Pam and Alex did for us over the last three years,” Turner said. “We’re definitely going to miss them. They were more than excellent car owners for us during our time together.”

The new season will bring a fresh scorecard for Turner, who hopes to improve once again on his career year. While the Caistor Centre driver will be in a different ride next season, his plans are to race in familiar places.

“Right now our plans are to have our car in the Mobil 1 booth at Motorama next March,” Turner said. “We plan on competing weekly with the Kool Kidz-Corr/Pak Sprint Cars at Ohsweken on Friday nights in 2019 and trying to repeat as SOS champions. We’ll try to go to Ohio, Michigan and New York as well when we have time.”