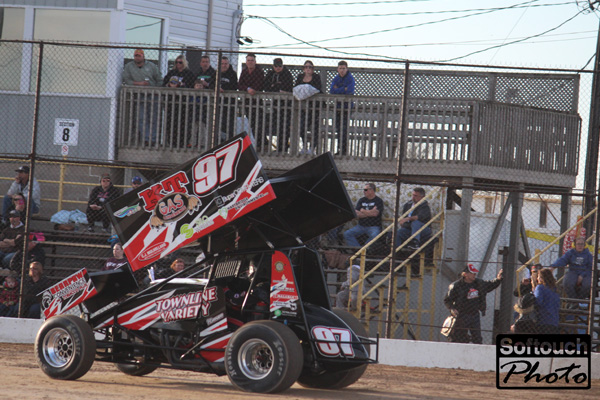 Turner started the night with a fourth-place time trial effort and then was the beneficiary of the number four inversion pill that put him on the pole for his heat race.

“We were really good in the heat race. I won by almost a straightaway,” Turner said. “The cushion was halfway up the track and it was pretty big. Anybody who was fast was up on the cushion. That’s where I ran in the heat.”

The heat win solidified Turner’s spot in the redraw for the main event. He pulled the third starting spot and lined up inside the second row for the 25-lap main event.

“I started third and I was okay,” Turner said. “I stayed in front of Westbrook for a few laps and then he got by me and ran the leaders down. I was as far back as eighth or ninth and it was almost like the bleeder kicked in and it got some air out of the right rear and I started driving by guys again.”

While Turner nearly slipped outside the top-10 at one point, the car got stronger late in the main event. Turner’s late resurgence solidified his eighth top-10 finish of the season.

“I was back up to sixth with two laps to go and Coleman Gulick threw a big slide job at me and got me in turns one and two,” Turner said. “I felt like I just needed to be a little tighter in the centre of the corner and I think we would have been good. Overall, I was pretty happy.”

It was the first of three opportunities for Turner to race at Merrittville with his 360ci Sprint Car this season. He earned a third-place finish back in April before claiming a top-10 last weekend at his former home track.

“I like that place,” Turner said. “In the Feature it was just a little bit slicker than I thought it was going to be. It was slick to a cushion in turns one and two, but there wasn’t much of one in three and four.”

“Anytime you run in the top-10 with the ESS it’s a solid showing,” continued Turner. “I was really happy. I just didn’t tighten the car up quite enough. We love going to Merrittville because we saw a ton of family and friends.”

Turner plans to be in action for two or three events this weekend. He will race Friday in weekly action at Ohsweken Speedway. He also intends to compete in an ESS Speedweeks event or with the NRA Sprint Invaders. Get Cory Turner’s most up to date schedule by following him on social media.