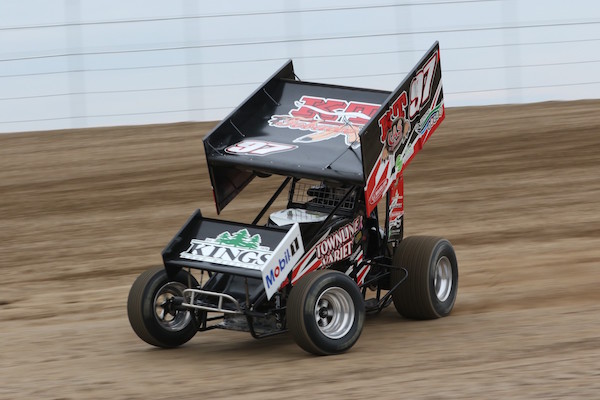 CAISTOR CENTRE, Ont. (August 22, 2018) – Cory Turner was back behind the wheel of his KT Tobacco/Silo Wireless No.97 360 Sprint Car for a doubleheader of weekend action with the Southern Ontario Sprints. Friday night, Turner earned a sixth-place finish in combined Kool Kidz-Corr/Pak versus SOS event at Ohsweken Speedway before a third-place result on Saturday night at South Buxton Raceway in Merlin, Ont.

On Friday night, Turner started the evening by driving to a fourth-place finish in his heat. It earned him enough passing points to qualify for the redraw, where he pulled the eighth starting spot for the main event.

Lining up outside row four in his Mobil 1/Kings Wood Products car, Turner maintained his spot and eventually moved forward to take sixth. He raced for most of the night with Jim Huppunen and Steve Lyons.

“We weren’t terrible. We pulled eighth and ran sixth,” Turner said. “We were as good as the guys in front of us, just not quite fast enough to pass them.”

On a humid night, the track maintained its moisture significantly better than it has in past weeks and produced a much faster racetrack than the typically slick track Ohsweken provides.

“We just missed it a little bit,” Turner explained. “In the Feature, the track has been different the last couple of weeks than it has the whole year and we just need to change our game plan a little bit going forward.”

After the team’s 12th top-10 result of the season, Turner and his crew prepared the car overnight for Saturday’s western trip to South Buxton. The night started with Turner starting on the front row of his heat race with younger brother Ryan. Cory ran second and qualified for the redraw.

Cory pulled the pole for the Feature while Ryan pulled second to make an all Turner front row. Cory jumped out to an early lead and pulled away by a straightaway until he hit lapped traffic around lap nine.

“I ran down the lapped traffic within nine laps from the pole and then there were guys two wide in front of them and I couldn’t get by them. That put Dylan (Westbrook) and my brother right on my back bumper.”

Following a late restart, Ryan was able to get passed Cory, but he stayed close in a three-car battle up front. On the final lap, Ryan and Cory raced into the final two corners in a battle for the win before a lapped car slowed them both and allowed Westbrook to drive the top to the win.

“I could hear my brother the next five laps after the caution,” Cory explained. “He got by me and then I had to lift. I almost got him back down the backstretch around a lapped car, then actually, we almost had a shot at the win on the last lap. My brother got pinched down by a lapped car and then I tried to get by them both, but Dylan drove around us all.”

The podium finish marked another solid points night for Turner with the SOS, who has now finished on the podium in four of five races with the tour this season. It was also his ninth top-five and 13th top-10 of the season.

“We extended our points lead and that’s the goal: to win the war,” Cory stated. “I was 22 points up on my brother going into the weekend and I believe I’m 45 or more points up on Dylan now with three nights to go. We’re looking forward to the finish.”

Cory Turner will be back in the seat on Friday, August 24 at Ohsweken Speedway, for a night that also marks the annual Team Turner Racing corn roast. Everyone in attendance is welcome to stop by the Turner pit area to enjoy a post-race snack in honour of Cory’s grandfather, Don Turner.

“We always have a good time with that and cook some corn, sausages, burgers,” Cory said. It will be a good night.”

Cory also plans to have his car on display at KT Gas and Convenience on Saturday, August 25, located at 849 Highway 54, just west of Ohsweken and Middleport. For more information on Cory Turner Motorsports, visit www.coryturnermotorsports.com.