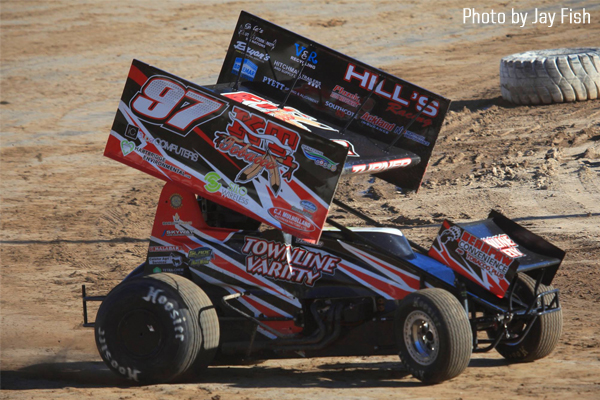 The weekend started with the PSTs only visit of the season to Turner’s home track Ohsweken Speedway. Turner started the night by racing to a second-place finish in his heat race on a very fast track. That result put Turner in the redraw for a top-eight starting spot in the main event. It led to a seventh-place position on the starting grid.

The track was unusually slick for the Feature given the conditions for the heat race. The curve ball on track conditions surprised Turner, but he was still able to navigate his KT Tobacco/Silo Wirless No.97 to a top-10 result.

“It wasn’t an Ohsweken points night, it was a Patriot Canada points night so I kind of through something at the car,” Turner explained. “I didn’t think it was going to slick off as much as it did. I just freed the car up too much. I wasn’t good early. I could make good laps on the top once in a while, but I had to be absolutely perfect up there. I got over the cushion a couple times and that set us back.”

While Turner felt he wasn’t strong at the start of the 25-lap main event, he did improve as the race wore on.

“Our last five laps, I had half a second on the guys in front of me,” Turner said. “I’m still a little bit baffled by that, that we were as good as we were late in the race, but struggled in the middle of it.”

The following night, Turner travelled to Eastern Ontario to battle the Patriots at Brockville. The tight and tricky 3/8-mile proved challenging for Turner and several drivers in the field. Turner drove to a sixth-place finish in his heat.

“The heat race we rolled out and it slicked off a little more than I thought,” Turner said. “We were really free and I just tried to keep the wheels on it and not hit one of those implement tires.”

The sixth-place finish put Turner in the Dash with a chance to earn a starting spot as high as ninth for the feature event. He finished fourth in order to line-up 12th ahead of the 25-lap A-Feature.

“We changed the car for the Dash,” Turner said. “I felt like we were better in the Dash and better again in the Feature. We got better as the night went on, but we definitely didn’t roll out as fast as we would have liked to.”

During the Feature, Turner raced inside the top-10 for most of the race and battled with Chris Steele for the eighth spot repeatedly. Turner ultimately took home a ninth-place result for the second night in a row.

“I just felt like we didn’t have enough side bite,” Turner said. “I was okay down in turns three and four, but I was really losing a lot of time down in one and two. I don’t know if I was too tight in or too free in the centre of the corner. I’m going to have to watch the Go Pro and look at my hands and see what exactly was going on.”

Both tracks provided good slick track experience for Turner, an area his Hill’s Racing Team is focused on improving this season.

“Slick tracks are what you need,” Turner said. “When it comes time for the Canadian Nationals, it’s always slick and it always will be slick. Any big race you go to, it’s going to be slick when you get a lot of cars. The more slick tracks we see now, the better it makes you as a driver and the more you get to work on it. It helps immensely going forward.”

Following this weekend, Turner now has six top-10 finishes in eight starts this season. The strong start to the season certainly helps Turner build confidence into the busiest part of the season.

“Two top-10s and the car is in one piece, so that’s a positive,” Turner explained. “The season’s going by quick. We’ve had a really good start. We’ve only been out of the top-10 twice, so our results have been far better this year compared to last year. We just need to go back to the drawing board a little bit, get back to basics and see what we can do going forward.”

Turner will be back in action at Ohsweken on Friday, June 15 for Wall of Fame night. For additional event information, visit www.ohswekenspeedway.ca.