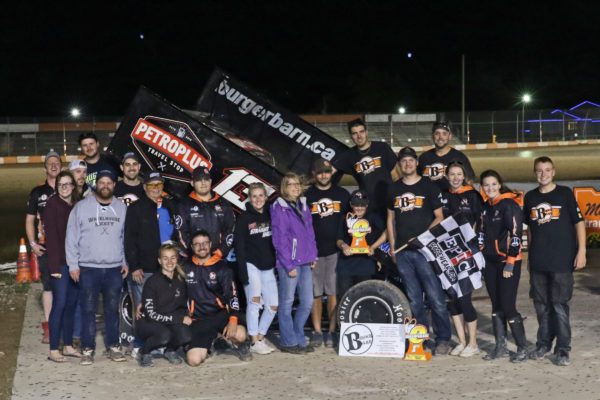 CAISTOR CENTRE, Ont. (September 25, 2019) – Now with the event in the rearview mirror, Cory Turner has had time to reflect on his recent accomplishment at Ohsweken Speedway’s 15th annual Canadian Sprint Car Nationals on September 13 and 14 where he earned his first career top-10 finish at the event with a sixth-place result behind the wheel of his Petro Plus/Burger Barn/Mobil 1 No.13 360 Sprint Car.

The $10,000 USD-to-win event has been the biggest event on Ohsweken’s schedule since it started in 2005. This year was no different with 60 cars signing in for competition at the major event. The weekend started with Friday night’s Burger Barn Night Before the Nationals as drivers were competing to earn one of three starting spots in Saturday’s main event by winning one of three 15-lap Features on Friday night. Turner did just that.

Turner started seventh in his heat race, which gave him the opportunity to drive forward for some big passing point gains. He took full advantage of the offer and drove to a second-place finish which put him fourth overall in passing points and gave him a starting spot outside the front row of the first 15-lap Feature.

“We had an all-out thrash to get ready for our Feature because we were in the fifth heat, but the first Feature. So we only have 15, maybe 20 minutes. We thrashed and were ready,” Turner said. “Mark Smith battled us hard early and we ended up getting back by him and then led the rest of the race and won. So that was pretty cool that it locked us into the show for Saturday. It took a lot of pressure off.”

The win meant Turner wouldn’t start any worse than ninth in Saturday’s 35-lap, $10,000 USD-to-win event, but the preliminary action on Saturday meant he could still try to improve on it. Turner time trialed in the fifth group and set quick time for the night, a feat that surprised even him.

“We have to thank Grisdale Racing Products for the Fast Time overall award, Inside Track Motorsport News for their Fast Canadian bonus, and we have to thank Mark and Angie Rinaldi at Brighton Speedway for the top Southern Ontario Sprints car bonus as well,” Turner said. “All of those bonuses and their support really mean a lot to our team and the sport.”

The quick time was good for Turner, but meant he had a challenged ahead of him in his heat race. Starting third in his heat, Turner was tasked with advancing to first or second in order to qualify for the pole dash in order to improve his starting spot in the main event.

I got pinched on the start and I couldn’t get out of the bottom, so I fell back to sixth. I got back to fourth, but we didn’t transfer because they only take the top three,” Turner explained. “We ran the B-Main at the back to try a few things. I did that for three or four laps and it worked.”

After his B-Main test session, Turner prepared for the biggest race of the season. He lined-up ninth on the starting grid and set out to race forward as quick as possible in what turned out to be a caution-free race.

“I got off to a bit of a slow start in the Feature,” Turner said. “I started in the inside row in ninth and I got pinched a little bit and once I got going I got up on the outside and started driving around guys. The race ran straight through and we got to sixth and I was pretty happy about that.”

Turner was “pretty pumped” about his team’s performance in the biggest event of the year.

“We were good all weekend. “it was the slickest Nationals we’ve had in a while,” Turner said. “We missed it just a little bit in the heat race on Saturday with the circumstances. I would love to see what we could have done if we were in the pole dash and started sixth or seventh. I think we were capable of running fourth or fifth.”

Cory Turner would like to thank all of his marketing partners and team supporters as well as the combined effort from his outstanding Burger Barn Racing and Team Turner Racing crew for their efforts during an exciting season of action at Ohsweken Speedway.