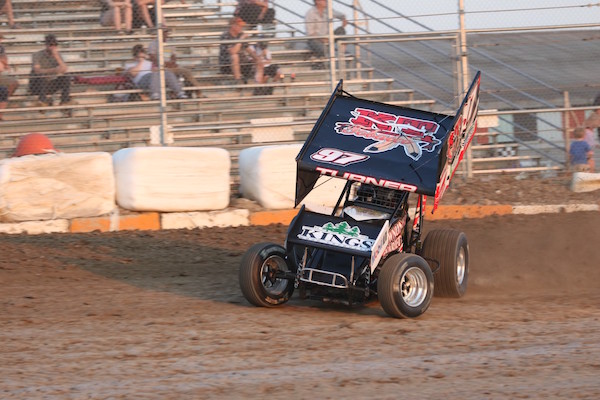 CAISTOR CENTRE, Ont. (July 17, 2018) – Cory Turner overcame a tumultuous night and recovered from a heat race incident to score a seventh-place finish and his ninth top-10 of the season at Ohsweken Speedway last Friday night.

The night started with what looked like a promising heat race run after a good draw for starting position. Turner lined-up second and quickly grabbed the lead while running against the cushion.

“I was leading the heat and had it in the bag with one lap to go after going from second to first,” Turner explained. “The cushion kept rolling up and the track was slick to a curb. The car was really good and I was running right up on the edge, but a big three foot piece of mud came apart from the track and the car turned straight right and we put it in the fence in turn two on the last lap. I drove it the same way I did the other seven laps.”

The result not only caused damage to the car, but also cost Turner his passing points and forced him to start the main event in the final starting spot instead of inside the top-eight. His team rallied to repair the car for the main event where he raced forward to a seventh-place finish from 21st.

Despite the damage and a less than perfect setup, Turner was happy with how the car performed as he raced through the field. His drive up to seventh saw him pass 14 cars to earn the night’s Hard Charger award.

“I was happy with the car. We were really fast and we passed a lot of cars,” Turner recounted. “I saw the move over flag when I was in seventh and I couldn’t really get to anybody else. Tyler Hendricks was just ahead of me and we were just starting to get to him. We were in 15th on the first caution and it was single-file, so Dylan Westbrook was already in turn one when we were in turn three and he only lapped us by half a car at the finish.”

Despite a decent end result, Turner was quick to own up to his heat race mistake and admitted it is a lesson well-learned.

“This week was on me,” Turner said. “I shouldn’t have cut it that close on the cushion, but I was trying to be fast. I had two fast guys in my heat in Mack DeMan and Chris Steele and I didn’t know where they were at. They said they weren’t close, but I didn’t know that at the time. It wasn’t ideal because it was a re-draw spot.”

Turner and his team are now gearing up for a big tripleheader weekend of action with the Patriot Sprint Tour. The Patriot’s new Canadian Triple Threat weekend will see three $3,333-to-win and $333-to-start races with stops at Ohsweken on Friday, Brockville Ontario Speedway on Saturday and Cornwall Motor Speedway on Sunday.

“I’m really looking forward to getting back to the slick stuff on Saturday like we had at Brighton two weeks ago,” Turner said. “I’d really like to give Steve Poirier and some of the other top guys a run for their money in the slick. I don’t know if we’ve got a program that’s as good as them yet, but we’ll find out this weekend.”

Friday night’s event at Ohsweken Speedway is also Sponsor Night. Fans will have a chance to meet Cory on the track at intermission for autographs. Race time is 7:30pm. For additional event information, visit www.ohswekenspeedway.ca.