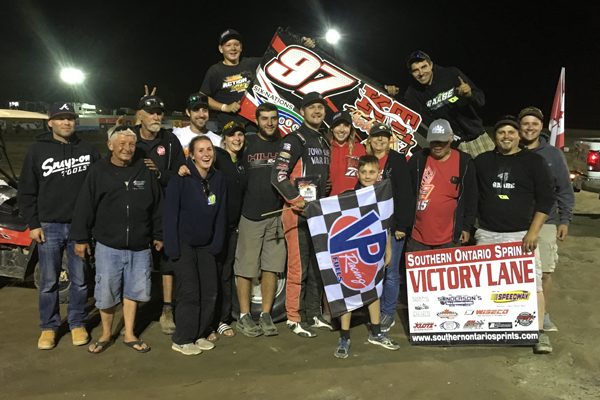 CAISTOR CENTRE, Ont. (July 10, 2018) – Cory Turner had a rollercoaster weekend of Sprint Car action, but when the dust settled he walked away with his second win of the season. Turner was in action at Ohsweken Speedway on Friday, July 6 and at Brighton Speedway with the Southern Ontario Sprints on Saturday, July 7.

The weekend started with what appeared to be a promising heat race. Turner quickly drove from fourth to second and was looking to track down leader Chris Steele, when the car suddenly darted to the right while racing through turn four.

“The stud that holds the tie-rod broke and just sent us in the hay bales in turn four,” Turner explained. “I thought the car was going to be a lot worse than it was. We spent the rest of the night trying to get it back together. We had six or seven guys thrashing on it and we got it back together, but didn’t have a lot of time to set it up for the Feature.”

The team was able to piece the car back together in time for Turner to start last in the 17-car field. He worked his way forward, but without a caution until the final lap, his unfortunate track position to start the race prevented him from moving into the top-five.

“We got rolling pretty good and I thought we were making really good laps in the middle of the Feature, and I was happy with the car,” Turner said. “We just started too far back. We definitely needed a couple of cautions to break it up so we could gain some spots. I was really happy with the car considering how the heat race went. You’re going to have some of those nights in racing. We showed good speed all night, and I was happy afterward.”

After the team spent time overnight and in the morning making additional repairs to the chassis and the car’s front end, they lined up on the front row of heat 1 at Brighton Speedway with the Southern Ontario Sprints. Cory lined up alongside his father, Jamie Turner, with his brother, Ryan, starting immediately behind him. He drove to a second-place finish and earned a spot in the redraw.

“The first thing I think about is not wrecking them because I’m going to hear about it,” laughed Cory about racing with his dad and brother. “When my dad got out in front of me going good, it’s fun. If there’s a guy I want to lose to, it’s my dad.”

Following the heat, Turner’s team pulled him the pole starting spot for the 25-lap main event. After a caution in the opening 10 laps, Turner maintain the lead and then had a number of tough decisions to make as he worked through slower traffic in order to maintain his lead over Mitch Brown in the latter half of the race.

“You have to go where they’re not,” Turner said of racing with the lapped cars. “I was running the top and the first couple of cars I got to were running the bottom, so that was okay and I got through them without any real trouble. After that, a couple of times guys would run low and all of a sudden switch their line. I almost got into the back of a couple of guys. I just tried to keep all four wheels on it and I knew we had the fastest car, I just needed to get through those guys as quick as I could.”

He did so successfully and then overcame a green-white-checkered finish after a lap 23 caution to score his second win of the season and the second of his career at Brighton.

“It feels good,” Turner said of the win. “I try to pride myself on not wrecking equipment, but we’ve been wreckers the last couple of weeks. Now we’ve got the checkers. We’ve showed good speed all year. We’ve been really, really good. When we were at Brighton last month I felt we let one get away. I went a little bit further on my adjustments and the car was just phenomenal. I can’t thank the crew guys and everybody enough for coming down on Saturday.”

Turner will be back in action at Ohsweken Speedway on Friday, July 13 for Sponsor and Kids Bike night presented by Strickland’s GMC. Race time is 7:30pm. For additional event information, visit www.ohswekenspeedway.ca.