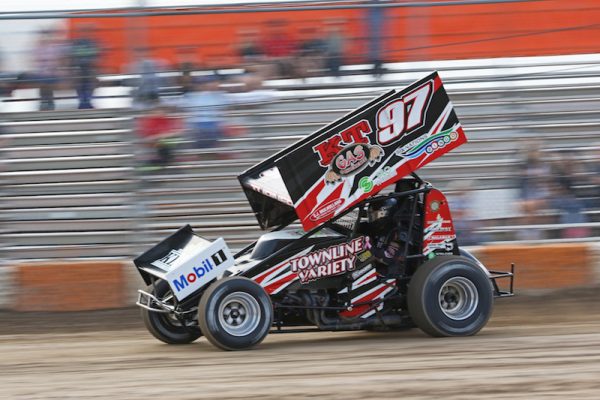 CAISTOR CENTRE, Ont. (August 27, 2018) – Cory Turner collected another heat race win and drove to seventh-place finish in the Feature behind the wheel of his KT Tobacco/Silo Wireless No.97 during 360 Sprint Car action at Ohsweken Speedway on Friday, August 24.

Turner started the night with a heat race win in his Braemar Building Systems/Mobil 1 No.97 after starting on the pole of heat race one. Turner ran a smooth and consistent eight laps to score the win over Tyler Hendricks and teammate Alex Hill.

“The heat race was good,” Turner said. “I’ve given away redraw spot just by getting over the cushion in the last while, so I was just driving through the middle of the track and trying to keep my momentum and not make a big mistake. The track was narrow last night, so you could use all of it.”

The heat race win put Turner into the redraw for the top eight drivers in passing points where he pulled the eighth starting spot for the second week in a row. In the opening laps, Turner had some close quarters racing with his teammate Hill as well as Jake Brown as he tried to race forward.

“Jake and I traded a lot of sliders last night,” Turner said. “I had him at the white flag (for sixth) and he ended up getting back by me. I could have been a little meaner with him in turns three and four. He snuck around the top of me. He and I probably throw more sliders at each other than anybody and we’ve never come together, so it’s good.”

On lap nine, three cars racing just in front of Turner came together, including Tyler Hendricks, Mack DeMan and Hill. The result was a nearly one hour long red flag. During that time, teams were permitted one crewmember to make adjustments to the car. That allowed Turner and his main crew guy, Nathan Jackson, to discuss possible changes.

Over the final 11 laps, Turner raced with Brown and Chris Steele before finishing in seventh. The top-10 result was the 14th of the season for Turner. Follow the race, Team Turner Racing hosted their annual corn roast in the pit area in honour of Cory’s late grandfather, Don Turner.

“My grandpa always did the corn roast starting past in the 70s,” Cory explained. “It just became a tradition that every August he would do it at Merrittville one Saturday. We always liked doing it. When my dad went back Sprint Car racing again, we decided we should start doing it again because we kind of missed it. We thought it was a good way to commemorate him. We always look forward to it. I won on corn roast night last year and my dad won on it three years ago, so it’s always been a special night for us.”

The team also spent Saturday at KT Gas and Convenience with his No.97 machine in support of their customer appreciation event.

“We had a great day out at KT for their customer appreciation day,” Turner said. “We really enjoy the support they provide us all season long, so we look forward to the opportunity to give back to them whenever we can.”

Now Turner will prepare for his busiest week of the season over Labour Day weekend with four potential Feature races. It will begin on Friday, August 31 with double Features for the 360 Sprint Cars at Ohsweken, beginning with the rained out July 27 event before the regularly schedule program. Then, he will head east to Brighton Speedway for the Labour Day Classic Weekend with back-to-back night of action on Saturday, September 1 and Sunday, September 2 with the Southern Ontario Sprints. Turner enters the SOS portion of the weekend as the current point leader.

“I’d like to win the SOS points and finish second at Ohsweken,” Turner said. “That’s our goal now. We just have to keep finishing races and finishing up front on the podium. You have to take what the car gives you and bring it home. We have to get through it one race at a time and avoid anything self-inflicted. We’re excited about it.”