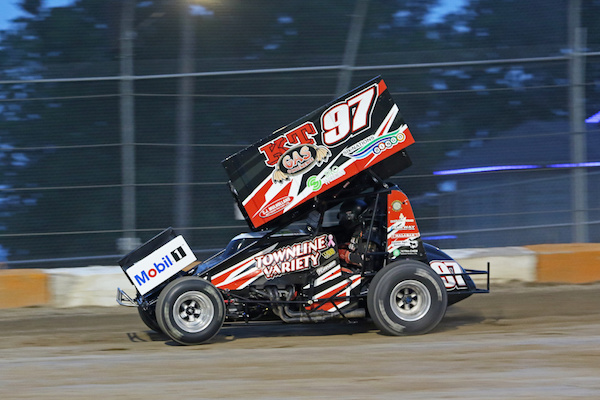 CAISTOR CENTRE, Ont. (August 1, 2018) – Cory Turner turned in another strong weekend in his KT Tobacco/Silo Wireless No.97 Sprint Car and earned a second-place finish at Brighton Speedway with the Southern Ontario Sprints on Saturday night. It was his eighth top-five finish in 14 starts this season. Friday’s Feature at Ohsweken Speedway was rained out.

Turner started the weekend with a heat race win at Ohsweken after outfoxing Dylan Westbrook and Mack DeMan to claim the victory.

“We started on the pole of the heat, but Dylan and Mack started in the row behind me, so it’s not like it was given to us,” Turner said. “We had a caution with a couple laps to go and Dylan was right on my back bumper too. The car was really good and I was happy with it.”

Turner was scheduled to roll off eighth before the rain came and ended the night early. The team then reset and prepared for Saturday’s action at Brighton where Cory ran second in his qualifying heat to start the night. The runner-up result put him in the redraw where he pulled the eighth starting spot for the second night in a row.

“We got past a few guys on the start,” Turner said. “Kyle Phillips and Tyler Rand started first and third and they were both running the bottom. My brother Ryan got around them on the top and I was following him. He just got by them coming to the start-finish line and I had them down the backstretch, but the caution came out, so we went back a lap.”

That forced Turner to restart in fifth instead of third and to begin the process of working around Rand all over again.

It took me another 10 laps to get around Rand because the bottom was the place to be and he was on it, so you have to go where he’s not,” Turner said. “I was able to get around him in lapped traffic.”

The pass put Turner in third for the final restart of the race with four laps to go with his brother Ryan leading and Holly Porter holding onto second.

“I was able to get around Holly with two to go,” Turner said. “My brother was about 10 or 12 car lengths ahead of me at the end, so it wasn’t close. I would have liked it to be closer and give him a run at the end.”

A third win on the season certainly would have been nice, but Cory was as excited as he’s even been to finish second as he watched Ryan celebrate his first career 360 Sprint Car win.

“It’s been a long time coming for him,” Cory said. “He definitely earned this one when he drove by Holly. It’s cool, both my Dad’s first win and his first win, I ran second.”

There is no 360 Sprint Car racing at Ohsweken Speedway on Friday, August 3, so Turner plans to compete at Land of Legends Raceway in Canandaigua, NY with the Empire Super Sprints on Saturday, August 4.

“It’s a real gauge of where you’re at when you run with those guys,” Turner said. “Jason Barney, Coleman Gulick, Danny Varin and Chuck Hebing are all good down there.”