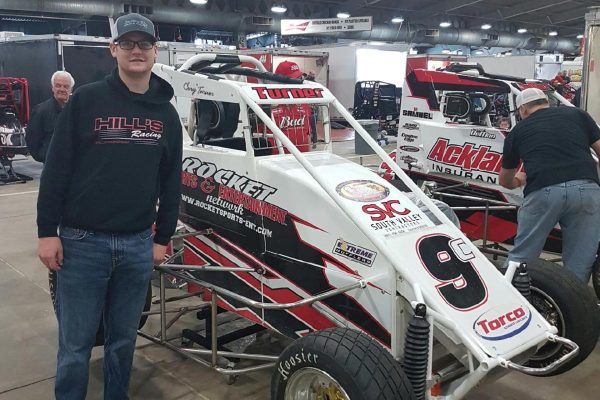 by Tommy Goudge (January 8, 2017) – Caistor Centre, Ontario – Cory Turner’s 2016 season is in the rear-view mirror, and he’s set to make his debut in both a Midget car and the prestigious Chili Bowl Midget Nationals next week in Tulsa, Oklahoma.

Cory will drive the #9c prepared by Sean Dodenhoff Motorsports indoors at the Tulsa Expo Raceway. The 31st annual edition of the Chili Bowl has drawn a record 363 entries and counting. Cory will have a tall order in front of him when he gets on track for his qualifying night on Wednesday, January 11.

“I have never even driven a Midget,” noted Cory. “I don’t have any expectations, but I am really looking forward to taking part in one of the largest races in North America! I have teamed up with a very knowledgeable team out of California, so they will be crewing the car and providing set up advice.”

While nothing can prepare a driver for his or her first Chili Bowl, Cory did gain some valuable experience in a variety of new situations during the 2016 season. Following two seasons in his own 360 Sprint Car, Cory joined forces with the Hill’s Racing Team for his third year. The opportunity allowed Cory to race at quite a few new venues, including many on the other side of the border.

“The biggest thing I learned from the traveling we did this season was how you prepare for not racing the same 4 or 5 tracks all the time,” Cory observed. “I usually try to compare a new track to somewhere I have been in the past, and think about what worked and what didn’t work at that specific track.

“We had a lot of fun traveling this year and we plan to do much of the same (in 2017). The traveling definitely helped us when we got back to our home tracks. In upstate New York, the tracks are generally very slick which helped us at home at both Merrittville and Ohsweken, as we don’t normally see overly slick surfaces there for much of the year.”

Cory will be back with the Hill’s team for 2017, and has plans to chase the Ohsweken Speedway championship, along with as many Empire Super Sprints, Patriot Sprint Tour, National Racing Alliance, United Racing Club, and ASCS National Tour events as time permits.

“We had a very strong finish to our season last year on the track and our team has had a great off season so far,” Cory said. “We are a lot further ahead this year compared to last year at the same time. We will be having our Hill’s Racing ride on display in the Ohsweken Speedway booth in March at Motorama, where we will be displaying some new and many returning marketing partners!”