Cory Turner Charges to Second-Place Finish with SOS at Humberstone 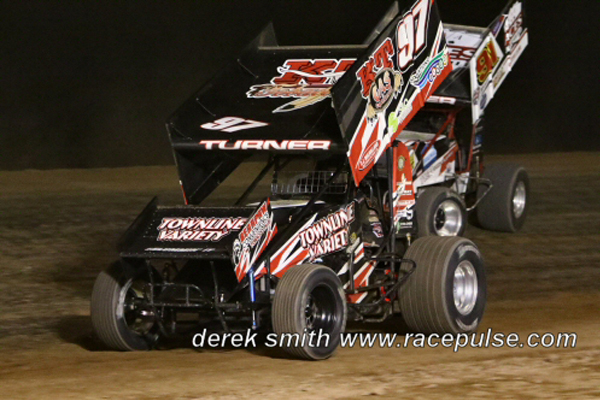 CAISTOR CENTRE, Ont. – August 15, 2017 – After a couple of weeks off due to rainouts, Cory Turner returned to action in a big way and drove to second-place finish with the Southern Ontario Sprints at Humberstone Speedway on Saturday night. It was Turner’s ninth top-five finish of the season in 19 starts.

Turner started eighth, but quickly made it known he didn’t plan to stay there. In the opening seven laps, Turner gained four spots and moved up to fourth by the time of a lap seven restart.

“Even on the pace laps when I stepped on the gas the car just wanted to go ahead,” Cory said. “I was just thrilled with how good it was. We got to fourth quick and had a quick caution. I got by Chris Jones and then my brother and we were really rolling.”

After getting past his brother Ryan for second around the halfway mark, Cory set out to track down race leader Dylan Westbrook. The leaders had to navigate through heavy lapped traffic on the slick and slippery surface.

“We caught Westbrook in lapped traffic,” Cory said. “We got to him, but we couldn’t really do anything with him. I never really had a shot at him in clean air because I was always in traffic. In lapped traffic, my car was awesome. It would hug the rail and just rip out of the bottom. It was a car that was really driveable. We’re really happy with how good the car was.”

After getting hung up behind a couple of lapped cars and then tagging an implement tire, Cory settled for second. It was a strong and positive return to competition after the team recharged over the past couple of weeks.

“It was absolutely phenomenal,” Cory said of the handling on his KT Tobacco/Silo Wireless No.97. “We’re doing a few different things with the car and it’s really been working well. Anytime you’re on offense all night, it’s a good feeling.”

Turner was also in action at Ohsweken on Friday night for a regularly scheduled Kool Kidz-Corr/Pak weekly race. He raced from seventh to fifth in his heat to qualify for the redraw and pulled the pole position. Unfortunately, rain forced the Feature to be postponed to next week for double features. Cory will still start on the pole.

“Dylan’s going to be starting beside us, so it will be tough,” Cory said. “I think we have a car that’s more than capable of winning, so we’ll see what we can do.”