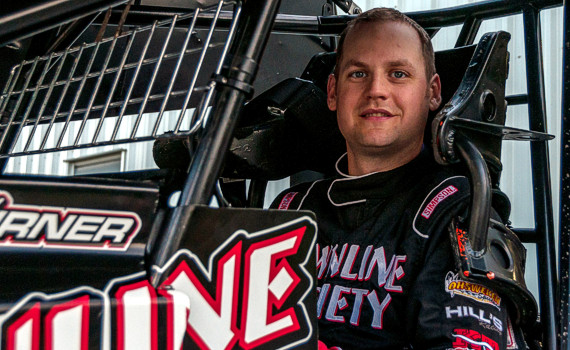 .
My name is Cory Turner, I am twenty eight years old and I am from Caistor Centre, Ontario, Canada. I work in the chemical industry and have a love for animals. Starting in 2016 I have been given the opportunity to further my racing career and drive for the highly competitive Hill’s Racing Team.
I have been spending my weekends at the race track for as long as I can remember. They say racing is in your blood and truer words have never been spoken when it comes to my family. My grandfather (the late Don Turner) had an illustrious 41 year racing career winning the 1980 Merrittville Speedway Modified Championship as well as being inducted into the Merrittville Speedway Wall of Fame! My uncles (Joe Plazek, Frank Plazek, and Todd Turner) as well as my Dad all raced Dirt Modifieds at the area Dirt Tracks.

I didn’t have a very early start in racing as my Mom would not allow me to race go karts as they were too “dangerous.” After I was able to graduate from Wilfrid Laurier University with a Business Administration Degree the following Winter I first purchased a street stock. In the Spring of 2011 I was able to hit the track for the first time and even then my goal was and always has been to race sprint cars at the highest level possible. My first memories of them are watching the World of Outlaws on the famed Syracuse Mile as well as at the Ransomville Speedway in the mid-nineties. I will never forget the feeling of purchasing my first car in which I literally cleaned out my bank account to do so and my Dad asking me on the way to pick it up if I “really wanted to do this”. My Dad always said he would buy as many race cars for me as his Father bought for him which is a nice round “zero”. My Grandfather during his racing days never had the nicest equipment but his work ethic from what I am told was unmatched. He and his Brother in law Roy Hamill would weld trailer hitches during the off season to fund the car during the summer months. Many of their cars in the 60s and 70s were home built from the ground up. The times have changed but the values and work ethic of what is takes to succeed in racing has not. It takes an unparalleled work ethic, a dedicated team, and support from facets of your life.

For the first three years of my racing career I found success at the street stock level winning driver of the year on two occasions, getting multiple feature wins, and finishing 2nd in points on 3 different occasions. After the 2013 season I felt as though it was time for a new challenge! One where I didn’t know if I was going to sink or swim but I was destined to jump in with both feet! In 2014 I made the rather large jump from street stock all the way to a winged 360 sprint car! Early in the year some nights were better than others but each time on the track I was learning and getting more comfortable! My family dynamic at the race track had changed as well as I had gone from racing against my little Brother on a regular basis in street stock to racing against my Dad.

In 2014 I was named Ohsweken Speedway Rookie of the Year and had many decent finishes but I was just getting started. In 2015 I got off to a slow start but I was consistent and was able to complete every lap. And shortly by mid Summer I was starting to contend for wins. My Dad always told me “I would lose a few before I was able to get one” and I definitely did that. But one Saturday night in August at the Brighton Speedway I was able to break through and get my first win in a sprint car! My team, our partners, as well as myself were estatic! The Monkey was off my back and we were building momentum as a team! Later that month I was able to follow my Dad to the checkered flag at Ohsweken Speedway for the first Father, Son 1, 2 finish in Ohsweken history! I closed the year 4th in Ohsweken Speedway Points, 5th in Southern Ontario Sprints Points, and won the “Little Feature” at the Canadian Sprint Car Nationals! Later that year I was named the “ON Dirt” breakout driver of the year!

This all led up to me signing with the highly competitive Hill’s Racing Team over the off season to pilot one of their cars in 2016! In only my third season in a sprint car my goal is to win the Ohsweken Speedway Points championship as well as have fun touring to new track across Ontario and the Northeast United States. I am also more focused on growing my personal brand and welcoming new and unique marketing partners to our team. This year I will have a new number, many new crew members but the same work ethic that made my grandfather successful many decades ago! I have never been so excited to get to this season under way and see what the future has in store!