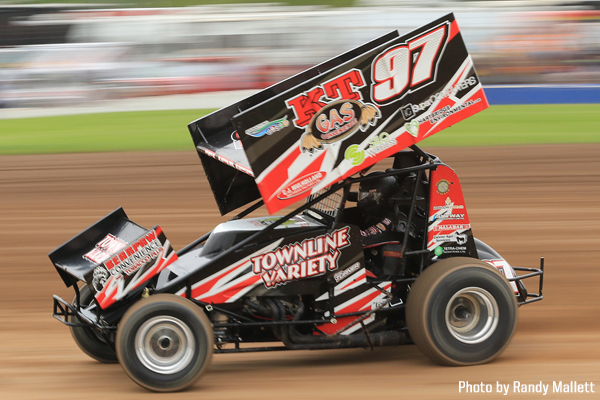 CAISTOR CENTRE, Ont. – May 30, 2017 – Cory Turner’s two-race weekend became just one when Mother Nature rained on Ohsweken Speedway Friday night. However, Turner still got to hit the track in his KT Tobacco/Silo Wireless Hill’s Racing No.97 Sprint Car on Saturday night when he travelled to Canandaigua (NY) Motorsports Park to take on the Empire Super Sprints.

Turner was third quickest in his qualifying group, but a six-car inversion sent him to the fourth-place starting spot for his heat race.

“We went third quick in time trials and I had a pretty tough group so I was happy with that,” Turner said. “I just got shuffled out a little bit on the start of the heat. I ended up sixth off the start and got back to fifth. I was running the guys down in front of me and just didn’t quite get there.”

The fifth-place finish put Turner 17th on the starting grid for the main event. The inside lane struggled to get up to speed when the green flag waved over the fast half-mile. That put Turner at a considerable disadvantage he was forced to overcome for the rest of the night.

“The inside row just didn’t go,” Turner said. “Coleman Gulick started 18th and had a straightaway on me by the end of turn two. On those big tracks, everybody is on the gas so long that it’s just magnified. After that, I was really happy with the car. We passed a bunch of cars once we got going. We ran 15th, but I don’t think it was really a representation of good our car was.”

Turner and his team hoped they would benefit from more slick track experience at the New York track known for that surface. Plenty of rain in the week leading up to the race axed the plan, but Turner still learned plenty that will apply to his home track at Ohsweken.

“I think it helps immensely,” Turner said of the trip to Central New York. “You get more seat time and there were some things I wanted to try. I thought they worked out really well, so hopefully I can relate that back to Ohsweken on Friday. The more racing you do, the sharper you’re going to be in the car and the more in tune you are with your car.”

While the result is Turner’s first finish outside the top-five this season, it was still strong progress for the team to round out the month of May.

“We’ve had a really good year so far,” Turner said. “We’ve finished every lap of every feature. We’re looking forward to getting back to Ohsweken on Friday and then, hopefully, there will be a lot of racing everywhere on the weekend.”

Turner hopes to be in action three times this weekend, beginning Friday at Ohsweken. The team then plans to travel to Fulton (NY) Speedway on Saturday to battle the Patriot Sprint Tour before tackling Humberstone Speedway in Port Colborne, Ont. with the Southern Ontario Sprints on on Sunday night. For the most up to date information, keep up with Cory Turner on Facebook and on Twitter.