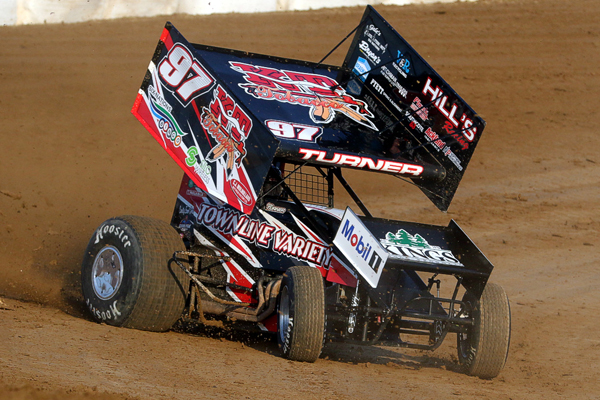 CAISTOR CENTRE, Ont. (August 8, 2018) – Cory Turner was back in the seat of his KT Tobacco/Silo Wireless No.97 360 Sprint Car last weekend and battled through a good learning experience during a trip to Land of Legends Raceway in Canandaigua, NY on Saturday, August 4.

Turner took on the always tough Empire Super Sprints where he timed in eighth fastest in his group, less than one-tenth of a second back of sixth, which happened to be the heat invert number to determine the lineups. Turner drove to an eighth-place finish in heat and was forced into the B-Main.

“There were a lot of good cars,” Turner said. “I wasn’t where I needed to be on the track in qualifying because I hadn’t been there in a year and a half. You only get two laps. If we had a Hot Lap session and then gone out for Time Trials, we would have been better, but it’s the same for everybody.”

Turner drove forward in the B-Main and late in the race made an important pass for second and the last transfer spot into the night’s main Feature event.

“We got everything together in the B-Main,” Turner said. “We just changed it and had way more drive. I didn’t get to second until about two laps to go. Even our B-Main was pretty tough. Matt Billings didn’t qualify and I drove around Jonathan Preston, so it’s not like we were racing against a bunch of slouches. There were guys that have won races this year.”

The track was what would likely be best described as “New York slick”, where the track was black enough driver’s could see their reflection underneath the lights, Turner said. Starting 24th in the A-Feature, Turner drove forward to 19th before an error in one corner cost him several spots.

“I was up probably five or six spots and then I got over the top in turns one or two and they all got back by me,” Turner said.

Ultimately, Turner finished in the same spot he started. The result of the race was not necessarily indicative of the trip’s productivity. Turner learned plenty about his own car and racing in the slick that will likely benefit come September’s Canadian Sprint Car Nationals.

“There’s some stuff I learned there that I could use for Ohsweken if it ever gets really slick like the Nationals,” Turner said. “That’s why the New York guys are good when they come to the Nationals, because they run on the slick all the time. It’s always good to go down and see where we measure up. We have some work to do in the slick.”

Turner is now set to return to action at Ohsweken Speedway on Friday, August 10. No 360 Sprint Car Feature has been contested there since July 13 due to a pair of late evening rain outs and a scheduled off week.

“I’m looking forward to getting back to Ohsweken since we haven’t run an A-Main there in almost a month,” Turner said.

Race time at Ohsweken Speedway is 7:30pm. For additional event information, visit www.ohswekenspeedway.com. For more information on Cory Turner Motorsports, visit www.CoryTurnerMotorsports.com or follow Cory on social media at the links below.