Electric Eighth For Cory Turner to Start July at Ohsweken 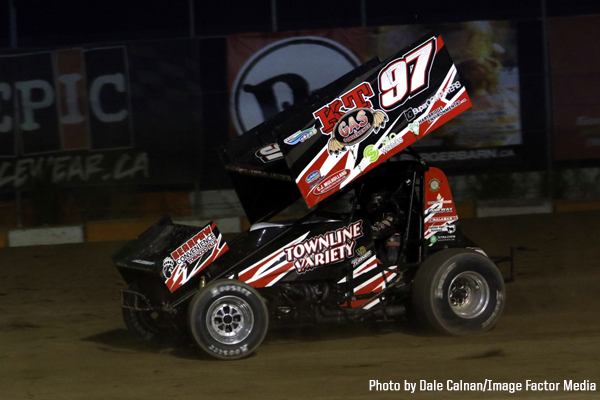 Cory Turner races through turn tow at Ohsweken on the way to an eighth-place finish to start the month of July. (Photo by Dale Calnan/Image Factor Media).

Turner started outside the front row for his heat race and used the advantageous position to his benefit. After the opening two corners, Turner held the point position and then paced the field for the remaining eight laps to secure the heat race win.

“In the heat race, we got lucky,” Turner said. “We got the outside pole, got the jump and that was all she wrote. My guys said we had a really good car. I think we were 13.6, which is a good lap around here.”

Turner’s quick lap of 13.667 seconds was the fastest lap of the heat race and set him up for a strong Feature run. The redraw added to Turner’s task as he pulled the seventh starting position for the 20-lap main event.

“Our car was really good in the Feature,” Turner said. “In the Feature we ended up drawing seven and I think we were as high as sixth. We ended up getting passed on the last lap and finished eighth. The car was good. Nobody really got away from us.”

The track was narrow with a heavy cushion up on the top of the track, but did still have a bottom groove. The outside lane was fast, but sometimes treacherous.

“I was going good early up on the cushion and then it cost me some time, probably a second and a half, when we bicycled,” Turner explained. “We caught a caution and drove around Lee Winger on the restart. I did it again after and then tried to stay off it and just ride until we could bring it home.”

With a threat of rain in the area and an already incredibly fast track, Turner had his car setup in anticipation of tacky conditions.

“I was worried about it raining during the race, so I left the car pretty free,” Turner said. “It feels like two-thirds of the races at Ohsweken we’ve had rain during the races, so it definitely plays in your mind. We had rain drops before we were going out, so I tried to leave it free just like we did in the heat race.”

Turner still turned in a strong effort with his eighth-place finish on a track where passing was at a premium. It continued to build on a strong first half of the season as Turner concluded his first dozen races of the season.

“We’ve definitely exceeded our finishes from last season,” Turner said. “We need to get a little luck in the redraw. We need to keep being fast in the heat races, get into the redraw and hopefully pull some good pills or just get our car faster and get to the front. I think we have the team capable of winning a couple of races before the end of the year. We’ve shown some good speed and I think we’re going to be good the last half of the year.”

Turner will continue the month of July with a busy weekend next week. He will return to Ohsweken on Friday, July 13 for Sponsor Night before heading to Eastern Ontario with the Patriot Sprint Tour on Saturday, July 14 and Sunday, July 15. The Series will stop at Brockville Ontario Speedway and Cornwall Motor Speedway on consecutive nights. For additional event information, visit www.ohswekenspeedway.com or www.patriotsprinttour.com.