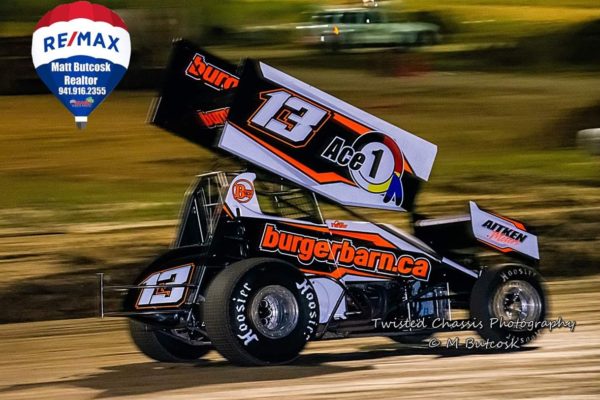 Turner’s No.13 On Display At Mobil 1 Booth After Successful Trip to Florida

CAISTOR CENTRE, Ont. (March 7, 2019) – On the heels of a successful trip to Florida and an A-Main appearance in the Ronald Laney Memorial King of the 360s at East Bay Raceway Park in Gibsonton, Fla., Cory Turner is kicking off the Canadian portion of his schedule this weekend with an appearance at the Motorama Custom Car and Motorsports Expo in Toronto, Ont.

Turner’s new Burger Barn/Ace 1 Construction/Mobil 1 No.13 Sprint Car will be on display in the Mobil 1 booth at Toronto’s International Centre this weekend from March 8-10.

“I’m really happy that Mobil 1 returned to our team this year,” Turner said. “We have an exciting new Burger Barn Racing team and I’m thrilled that we will have Mobil 1 on board again for our 2019 season.”

Turner is certainly upbeat to have his car on display this weekend after a successful trip to the Sunshine State that culminated in an 18th-place finish in the Ronald Laney Memorial. The trip saw Turner’s No.13 in action for five nights, including two nights of action at Bubba Raceway Park in Ocala, Fla. and three nights at East Bay. The weeklong trip proved beneficial to Cory and the entire Burger Barn Racing team.

“It was definitely helpful,” Turner said. “We got a lot of laps over five days and really got to shake things down. It’s always good to get seat time. I have to thank Jay and Celeste for taking us down there.”

The track and racing were challenging on the sandy Florida surfaces which kept Turner and his team on their toes. However, the team was relentless and finally found the success they had earned on the fifth night of action.

“On the final night, we started fifth in the heat and ran third,” Turner recounted. “That put us on the front row of the B-Main and, the way it worked, there were three Bs, 10 cars apiece and they took two from each and I ran second to Phil Gressman. There were a lot of good guys that didn’t make the show. It was a tough deal.”

With five nights of racing already in the bank, Turner plans to start the Canadian portion of his on track schedule with a trip to Outlaw Speedway in Dundee, NY on April 19 to race with the Lucas Oil Empire Super Sprints before returning home to Ontario to battle with the Southern Ontario Sprints at Merrittville Speedway in Thorold, Ont. on April 20.

“We’re hoping we can be good out of the gate because we’re a little ahead of past years,” Turner said. “Our car is ready and we’re chomping at the bit for April now.”

For ticket information on the Motorama Custom Car and Motorsports Expo and to view the full list of hours and events, visit www.motoramashow.com.