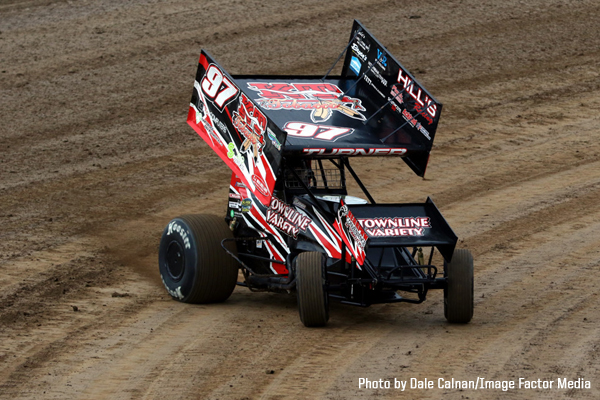 Turner had to work for his sixth top-five finish of the season though as he struggled early on in his heat and slipped to a fourth-place finish.

Turner’s fourth-place result in the heat race put him 12th on the starting grid for the 25-lap main event. Turner didn’t waste any time moving forward as he made a daring slice through the middle on the opening lap.

“We drove in hard and I just gave ‘er,” Turner said. “It seems like the outside rows are getting a way better run on the start. My dad started seventh and we were already by him down the backstretch. I think we went 12th to eighth on the first lap and by the first caution we were up challenging almost for the top-five.”

From there, Turner battled lapped traffic on several restarts and a tough racetrack. Plenty of rain over the week at the track made it a fast, but bumpy ride.

“We didn’t get in really good in the first corner after the restart and a couple of guys got by me and it took 10 laps to get back by them,” Turner said. “There was one time where Jake Brown lost his sideboard and we bicycled really hard. I thought we were going on our lid and we caught a caution right after it.”

“Usually the ruts are fast because that’s where the moisture still is,” he said. “If you don’t bicycle, you’re going to make some time, but if you do you’re going to lose a second. It’s tough that way.”

A caution with seven laps to go brought the final restart of the night and Turner was able to race forward to fourth, but the field was strung out from there on and made it impossible for the No.97 to move forward any further.

Turner plans to back in action this week at Ohsweken on July 7 for another round of Friday Night Excitement. Currently, Turner is 17 points back of the point lead in third. For more event information, visit www.ohswekenspeedway.com.