Cory Turner Slides To Second In Thriller at Ohsweken 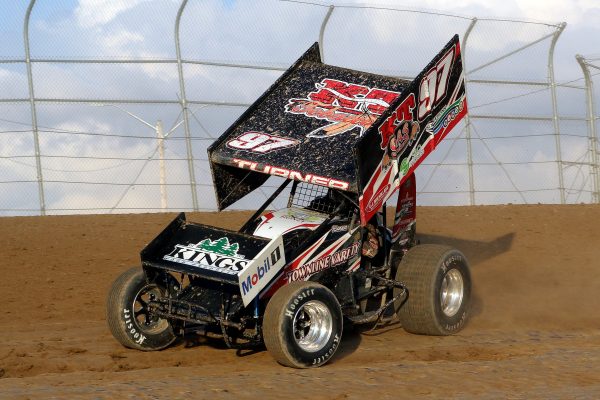 CAISTOR CENTRE, Ont. – June 5, 2018 – Cory Turner returned to action behind the wheel of his KT Tobacco/Silo Wireless No.97 Sprint Car at Ohsweken Speedway on Friday, June 1 where he earned his third-straight second-place finish. However, it didn’t come without a bit of drama and a flare for the dramatic in a one-lap dash to the finish where Turner threw everything he had at Dylan Westbrook.

To start the night, Turner started seventh in his qualifying heat and drove forward to a fourth-place finish. The plus-three positions earned him enough passing points for a spot in the redraw.

“I thought the car was really good in the Heat Race,” Turner explained. “We hadn’t really seen a track that was slick to a curb (at Ohsweken). We ran in Ohio last weekend and I had seen that Sunday night at Waynesfield, so that helped. We went from seventh to fourth in the heat race, and that’s what you have to do to get in the redraw.”

The redraw handed Turner the third starting spot for the 20-lap main event. On lap two he quickly jumped into second and set out to track down the leader Westbrook. He held the runner-up spot until a lap nine caution. On the restart he was engaged in a battle for second with Jim Huppunen before regaining the spot a few laps later.

“The battle with Jimmy slowed me down a little bit,” Turner said. “I missed a couple of corners and drove through No Man’s Land in three and four and then I got the wing back and I was really ripping the top well in three and four. All in all, the car was really good and our crew guys worked hard.”

Lapped traffic prevented Turner from drawing to within striking distance of Westbrook for the lead, but the deficit was eliminated when the caution flag waved with 19 laps complete to setup a one-lap dash to the finish. On the ensuing single-file restart, Turner threw everything but the kitchen sink at Westbrook to try and steal the win with slidejobs at both ends of the track.

“Before the restart I moved my wing back forward and I was just going to go anywhere he wasn’t,” Turner explained. “He drove in the middle and I just drove off the wall and let it go. He crossed me over and I gave it back to him again and I just got a little bit too fired up and got in a little deep and he could drive back underneath me to the win. I just needed to give him a little bit of a shorter slide to make him think.”

“We’re right there,” Turner said. “I didn’t feel like we had much worse of a car than him. It’s our third straight second-place run, so we’re happy with that. We just need to be one spot better next week.”

After a trio of second-place finishes to start the year at Ohsweken, Turner is certainly excited about his potential this season as the calendar flips to June.

Turner will be back in action on Friday, June 8 at Ohsweken Speedway on Rochester Knighthawks night. For additional event information, visit www.ohswekenspeedway.ca.