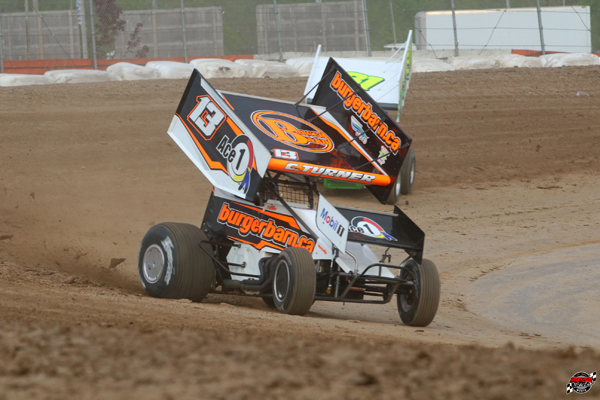 CAISTOR CENTRE, Ont. (May 28, 2019) – After a handful of early rainouts, Cory Turner’s Canadian season finally got underway last Friday night at Ohsweken Speedway where he earned a top-five finish in the track’s 24th season opener. Turner’s night started by driving from sixth to second in his qualifying heat race behind the wheel of the Burger Barn/Ace 1 Construction/Mobil 1 No.13 Sprint Car.

“We went from sixth to second in the heat race even though we struggled with our brakes,” Turner said. “I was a little worried because it was slick and you need brakes to turn the car in the slick. We got them sorted out for the Feature and I thought our car was good.”

Turner earned a spot in the redraw where he pulled the sixth starting spot for the 20-lap main event. He took the fifth spot from Holly Porter on lap four before swapping the position again one lap later. Then, on lap seven, Turner took the fifth spot again, this time for good.

“We were pretty decent,” Turner said. “I think the draw hurt us a little bit. I think we were capable of a podium if we had started in the first two rows. Our fastest lap of the race was lap 17 and we were predominantly better than the cars in front of us over the last five laps. We just need to get going a little better. We hit lapped traffic at bad spots a couple of times.”

A strong fifth-place finish was the building block Turner and his Burger Barn Racing team had hoped to gain on opening night.

“On Friday, I’d give us a B+ letter grade,” Turner said. “We were good, but we can definitely be a bit better, but I was pretty happy overall. The track was different than we’ve seen. It was slick to a big gnarly cushion. It doesn’t look like much when you’re watching, but it feels like the cushion’s going to rip your car apart.”

Turner also acknowledged that his team’s trip to Florida in February was a big help in preparing for opening night and adjusting to his new ride.

“Seat time is always good. There’s no substitute,” Turner said. “Florida is a very different animal, but it definitely helped me get used to the new equipment. I have all different engines, all different cars, all different wings and a different shock package now. We came out of the box decent, but there’s room for improvement. We’re capable of winning some races this year and definitely getting on the podium.”

Turner will be back in action on Friday, May 31 when the action will be live on MavTV Canada at 9:00pm. For additional event information, visit www.OhswekenSpeedway.ca.