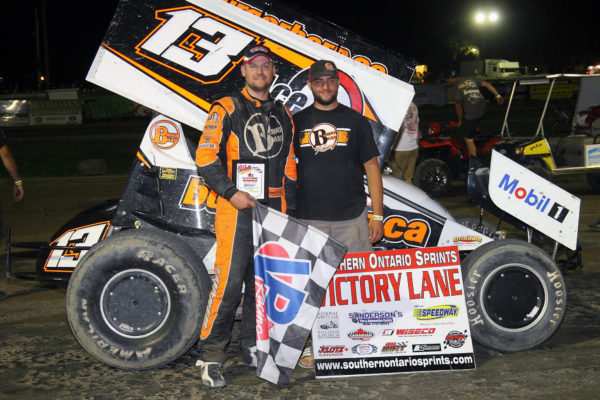 CAISTOR CENTRE, Ont. (July 7, 2019) – Cory Turner had another dominating performance at Brighton Speedway where he led all 25 laps to score his second victory of the season with the Southern Ontario Sprints and third overall on Saturday, July 6. He also registered a sixth-place finish on Friday night at Ohsweken Speedway during a busy doubleheader weekend.

“It was slick to a curb and our car was just a Cadillac,” Turner said following his Brighton win. ”This is our third win of the season, so it’s by far our best season in a Sprint Car.”

The weekend started with a strong heat race at Ohsweken where Turner drove from eighth to third and qualified for the redraw where he pulled the fourth starting spot for the main event. He moved forward to third before eventually finishing sixth.

“We were good early,” Turner said. “We were up to third until about lap 10 and then Westbrook got by me, my brother got by me, and we got a late caution before Mack DeMan ended up getting to me with a couple laps to go. The car was really good early and it just really got free. We haven’t had a track slow down like that in a long time.”

With a loose racecar late in the race, Turner raced conservatively and made sure to bring home a top-10 finish rather than driving beyond the car’s potential on that night.

“I’m starting to mature a little bit as a driver,” Turner said honestly. “When you don’t have the car underneath you, you just have to run your laps, bring it home and get them the next week. We’re fourth in points at Ohsweken, but we’re only 20 points back of the lead. It’s still tight and we have 10 weeks to go.”

After Friday night’s action, Turner’s Burger Barn Racing and Team Turner Racing crew quickly regrouped for Saturday’s event at Brighton where the Burger Barn/Ace 1 Construction/Mobil 1 No.13 was quick right away. After winning his heat race, Turner pulled the second starting spot for the Feature where he jumped out to the lead and then paced all 25 laps to claim the win.

“Our car unloaded fast,” Turner said. “We were good in hot laps, we were good in the heat race and I was lucky enough to draw the front row in the Feature and lead every lap just like the last time we were here. Our car was just a Cadillac. We could drive through the middle, on the top, on the bottom. We just went where the lapped traffic wasn’t. We were good. We’ve really got our program working well here, we just have to pick it up a little bit at Ohsweken.”

Following a lap three caution, the remaining 22 laps ran caution-free and forced Turner to work efficiently through slower traffic. While his extensive lead was reduced slightly, he was never in danger of falling into the clutches of his brother Ryan Turner or second-place finisher Mitch Brown.

“I was getting around the lapped traffic because they were all lined up on the bottom, which makes you feel a little bit safer because you’re covered up from a slider, then the guys can’t use the bottom to get by you,” Turner explained. “I thought we were actually better on the bottom than we were on the top at the end of the race. Nate and the guys gave me a hot rod and it was awesome.”

Following his win at Brighton, Turner will return to action at Ohsweken Speedway on Friday, July 12. Then, he and his Team Turner Racing crew will head to Humberstone Speedway on Sunday with the Action Sprint Tour for the rescheduled Bob Deswiage Memorial on July 14 in honour of their late crew member who past away during the off-season.

“We’re really looking forward to that event,” Turner said. “Our crew guy Brady is going to run a Crate car for Bob that we have all decaled up like one of his old street stocks, so it’s going to be a pretty cool night.”

For additional information on either event, visit www.OhswekenSpeedway.ca and www.HumberstoneSpeedway.com.