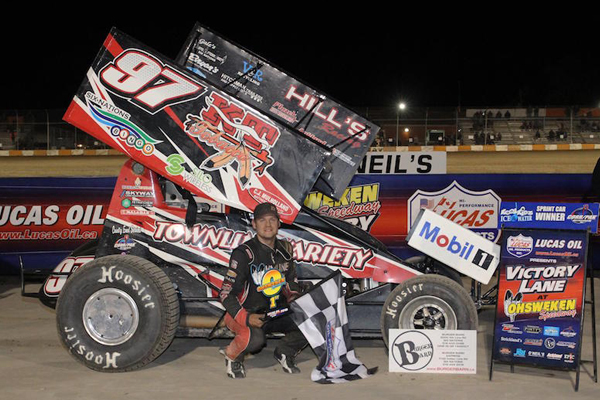 CAISTOR CENTRE, Ont. – June 19, 2018 – Cory Turner got past Tyler Hendricks on the final lap of the 20-lap 360 Sprint Car Feature to score his first win of the 2018 season in his KT Tobacco/Silo Wireless sponsored No.97 last Friday night at Ohsweken Speedway. He followed it up with a third-place finish on Saturday night at Brighton Speedway with the Southern Ontario Sprints.

“We’ve been really good the first six weeks,” Turner said. “Other than our Ohio trip, we’ve been on the podium every night. You need to be consistently up front and the wins will come. We’re really happy with the way the season’s gone so far. It’s a big testament to our car owners; our partners and we have a ton of guys that help us week in and week out. A lot of people have had a part in our success.”

Cory had a tough road to victory on Friday, racing forward from seventh to fifth in his heat race in order to qualify as the final redraw car.

“We definitely had the tougher heat,” Turner said. “I got by Jim Porter and I got by Mitch Brown to get into the redraw. Those heat races right now, you have to run your hardest. I snuck into the redraw and we got left the number eight pill.”

Starting eighth in the 20-lap Feature, Turner methodically made his way forward. Following the final caution on lap 12, Turner was embroiled in a heated battle for second with Jim Huppunen.

“We were good and I got into a slide job war with Jimmy and I finally cleared him with two laps to go,” Turner explained. “Hendricks had 20 car lengths on me and I ran him down pretty good, and then he got over the cushion coming to the white flag. I drove hard into turn one and let the car go up to the top and then railed the top in turns three and four and we won.”

The win was Turner’s third in a 360 Sprint Car and second of his career at Ohsweken. Following the win, the team had little time to celebrate as they performed maintenance and made changes to prepare for the Southern Ontario Sprints season opener at Brighton Speedway on Saturday night.

Turner raced to a third-place finish in his heat race to qualify for the redraw where he pulled the seventh starting spot for the main event. He wasted little time driving forward and was up to fourth by lap five and then had to work hard to chase down Kyle Fraser for the runner up spot after getting past Jake Brown.

He eventually drove up to second before falling back to third after a tough battle amongst lapped traffic with Dylan Westbrook in the caution-free race.

“We were good again and I was really happy with the car,” Turner said. “We got to the front on the bottom and I kind of stayed down there. I needed to go rip the cushion because it was good late in the race. It was a really good racetrack that was smooth right to the top.”

“I was really surprised we didn’t have a caution,” Turner explained. “We put extra fuel in because we thought we’d have one.”

Turner will be back in action at Ohsweken on Friday, June 22 and plans to compete on Saturday, June 23 at Merrittville Speedway with the Southern Ontario Sprints. For additional event information, visit www.ohswekenspeedway.ca and www.merrittvillespeedway.com.