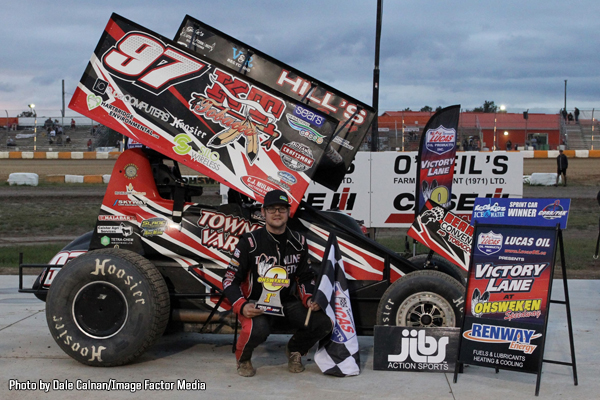 CAISTOR CENTRE, Ont. – August 21, 2017 – Cory Turner scored his first win of the season and first 360 Sprint Car victory at Ohsweken Speedway on Friday night. The win came in the August 11 make-up Feature that started the night and was Turner’s second career 360 Sprint Car win. His first was at Brighton Speedway on August 8, 2015.

“It was pretty cool,” Turner said of the win in his KT Tobacco/Silo Wireless No.97. “We’ve been close so many times. I think we’ve run second at least three or four times over the past four years. It was nice to nail that one down. It was a little lucky, but we had to be there to get it.”

In the regularly scheduled event that followed, Turner was third in his heat and drove to a third-place finish in the Feature. It was Turner’s third-straight podium finish. He has now finished second, first and third in his last three Features starts.

“I’m really happy with that,” Turner said. “Our car is 100 times better than it was a month ago. It’s really helped getting my main crew guy Nate back from Knoxville. He’s been spending a lot of time on the car and it’s showing. We didn’t change a whole lot for that second feature, but we were definitely good.”

The second Feature saw a nearly perfect racetrack that was slick from top to bottom, but still had moisture both on the cushion and at the bottom. It was a perfect recipe for slide jobs and Turner had several those in his battle for third and fourth with Jake Brown.

“It was fun racing with Jake,” Turner said. “The thing with the slide jobs is that you get such a good run in, but it kills all your momentum, so the guy crosses back over. It’s a lot of fun. You have to give and take. If you see him coming, you have to make the decision if you can drive around between him and the wall or if he’s going to slide right to the fence, you have to arc it back underneath him and give it back to him in the next corner.”

The second Feature of the night saw several outside invaders tackle Ohsweken with the Canadian Sprint Car Nationals looming in less than a month. Top runners Bryan Howland and Chuck Hebing were among those who used the race as a tune-up session.

“I like when those guys come in like Howland and Chuck,” Turner said. “It gives you a gauge of where you’re at. That was a pretty tough field in that second Feature.”

Turner is happy that his program is trending upwards at the right time as the points chase winds down at Ohsweken and several big events are on the horizon, including the 13th Canadian Sprint Car Nationals at Ohsweken September 15-16. With three Ohsweken races remaining for then, Turner also hopes to travel before then to perfect the slick track setup he’ll need at the Nationals.

“I want to go to New York because I know those tracks will be slick,” Turner said. “We’re doing some different things with the car, so I want to try it on a really slick surface like we’ll get at the Canadian Nationals.”

Friday night, Turner got to celebrate his win in the pits post-race with a couple of hundred supporters who turned out for the team’s annual corn roast. It’s an annual tradition that Cory’s late grandfather, Don Turner, started more than 40 years ago while racing Modifieds at Merrittville Speedway.

“He did it every year at Merrittville when that was his home track,” Turner explained. “When my dad got back into racing, that’s what we always did. We invite all our sponsors out, crew guys and everybody in the pits is invited. It’s just something we’ve always done and hopefully we’ll continue to do it for a lot of years.”

Cory Turner will be back in action on Thursday, August 24 at Ohsweken for Kool Kidz-Corr/Pak 360 Sprint Car action at the Triple Crown Showdown. Race time is 7:30pm. For additional event information, visit www.ohswekenspeedway.com.