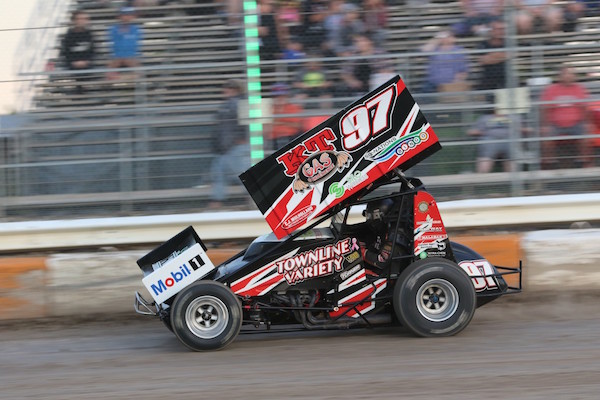 CAISTOR CENTRE, Ont. (August 13, 2018) – Cory Turner returned to the seat of his KT Tobacco/Silo Wireless No.97 360 Sprint Car this weekend and ran to an seventh-place finish last Friday night in the first 360 Sprint Car Feature contested at Ohsweken Speedway since July 13.

He started the night with a win in the first heat race of the night and we extremely pleased with how strong the car was as he outpaced Scott Kreutter to score the victory.

“The car was really good,” Turner said. “That’s definitely the slickest track we’ve seen in a heat race this year. I could put it anywhere and it would settle in and we would drive off. It was really good in the heat race.”

The heat win put Cory in the redraw where he grabbed the pole position for the 20-lap Feature race. Dylan Westbrook took the lead on the opening lap, but Turner stayed close with multiple slide job attempts to retake the lead.

“In the first five laps, we had a lot of drive,” Turner said. “I almost got back underneath Westbrook when he slid me for the lead in turns three and four for the lead. Then he came down to the bottom and we were in his tire tracks until the caution.”

The first caution of the race came at lap five and Turner did not feel his car was the same following the restart. He raced inside the top-five, but fell back to fourth and eventually to seventh in the closing laps following another restart on lap 11.

“I just never really got going after that caution,” Turner said. “Scott Kreutter and Mikey Kruchka got by me and then we just battled the rest of the race. It felt like it was shoving the nose in the centre of the corner. I was a little bit tight on entry and maybe I just tightened it up too much. When you’re tight on entry, then you’re loose on exit and it doesn’t have as much drive as it should have.”

The top-10 result was still a solid night for Turner, who gained valuable information for his notebook on a night where the racing surface foreshadowed the smooth, dry-slick surface that welcomes drivers for the Canadian Sprint Car Nationals each September.

“We won’t be using that setup for the Nationals,” laughed Cory. “The track was good. It was smooth and slick like we want. We just need to be a little bit better.”

The Feature was the first for the 360 Sprint Cars since July 13 after a pair of rainouts and a scheduled off week. Now, there are four points nights remaining, including a double Feature night at Ohsweken on August 25 to make-up the postponed race from July 27.

“It was good to get back, in that regard,” Turner said. “Hopefully we can have a clear stretch to the end of the year. We only have four points nights left, so hopefully we don’t have any rainouts and it should be good.”

Cory Turner will return to action on Friday, August 17 at Ohsweken Speedway at the Kool Kidz-Corr/Pak 360 Sprint Cars take on the Southern Ontario Sprints in the second challenge race of the year. Race time at Ohsweken Speedway is 7:30pm. For additional event information, visit www.ohswekenspeedway.com. For more information on Cory Turner Motorsports, visit www.CoryTurnerMotorsports.com or follow Cory on social media at the links below.

This message is only visible to admins.

Error: Error validating access token: The session has been invalidated because the user changed their password or Facebook has changed the session for security reasons.
Type: OAuthException
Subcode: 460
Solution: See here for how to solve this error