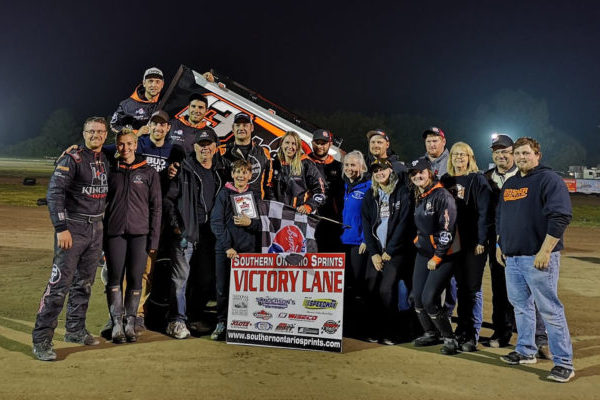 CAISTOR CENTRE, Ont. (June 18, 2019) – Like any racecar driver, Cory Turner set out to win the two races he had on his schedule this past weekend. And for the first time in his career, the driver of the Burger Barn/Ace 1 Construction/Mobil 1 No.13 360 Sprint Car did just that with a victory Friday, June 14 at Ohsweken Speedway before beginning his Southern Ontario Sprints championship defense with a win on Saturday, June 15 at Brighton Speedway.

“That’s the first time I’ve ever won back-to-back nights in the same weekend in any form of racing, so that was really cool,” Turner said. “We had a little bit of luck on our side.”

On Friday night at Ohsweken, Turner recorded a perfect night. He claimed a heat race win before the Feature victory. The main event win was one he had to earn. He started seventh and raced into second by the time of a lap 11 red flag when the leader wrecked. From there, Turner outran Mack DeMan to secure his first win of the season and first triumph for his Burger Barn team.

“Jay has got us some really good bullets under the hood. I knew Mack was going to be all over me so when we got to lapped traffic we had to make quick time of them,” Turner said. I got a little lucky that the top was where our car was fastest and the lapped cars were mostly down on the bottom. That kind of covered me up for a slider.”

Turner added, “Any time you can get a win for the team is great. Everybody gets a little more fired up and guys are a little more keen. It’s just as much work when you’re running 15th as when you’re winning, so everybody’s spirits are raised when you can have some success.”

On Saturday night at Brighton, a good draw put Turner near the front of the field for his heat race on a lightning-fast racetrack. A second-place finish put him in the redraw for the 25-lap main event where he pulled the outside pole. When the green flag dropped, Turner immediately jumped into the lead and never looked back on his way to victory.

“The car was just awesome. I could put it anywhere I wanted,” Turner said of his car at Brighton. “It drove like a Cadillac and was by far the best car I’ve ever had there.”

Again, Turner had to work for the win by battling through some thick lapped traffic late in the race. He ultimately prevailed but not before some tense moments knowing he had Holly Porter looking to track him down for the top spot.

“The track was still a little a narrow from the rain,” Turner said. “The lapped cars got two-wide and I didn’t know whether to really force it. You never know how big a lead you have and you don’t want to wreck yourself. I tried to let them sort out and I was lucky enough to take my time with them and get by them. As a racecar driver, you get a lot of fear when you’re off the gas behind lapped cars because you know whoever is behind you is salivating as they run you down.”

Turner dedicated the victory to his crew member Bob Deswiage, who passed away suddenly during the off-season. Lovingly referred to as “Bobby the Pilot”, Bob was often the team’s truck driver and loved each trip to Brighton.

“The first time he ever drove our truck was when I got my first win at Brighton four years ago,” Turne recalled. “He passed away over the off-season which was sudden and we didn’t really see it coming. He absolutely loved going to Brighton. Any road trip, he was the first guy at the shop and the last guy to leave when we got home. It meant a lot to me to get one for him there.”

Turner will return to action this weekend for another doubleheader, beginning at Ohsweken on Friday, June 21, a race that will air live on MavTV Canada at 9:00pm EST. If all goes well, the team will visit Merrittville Speedway on Saturday, June 22 for the second race of the Southern Ontario Sprints season. But don’t expect Turner and his Burger Barn Racing team to sit on their victories from this past weekend for long.

“With two wins, you can’t get complacent,” Turner said. “Everybody else is working on their stuff and the level of competition right now is probably the highest it’s ever been at Ohsweken with how many good full-time regulars there are. We have to keep trying to get the most out of our equipment and prepare it right. We’re excited to try and have another good run on Friday on MavTV.”