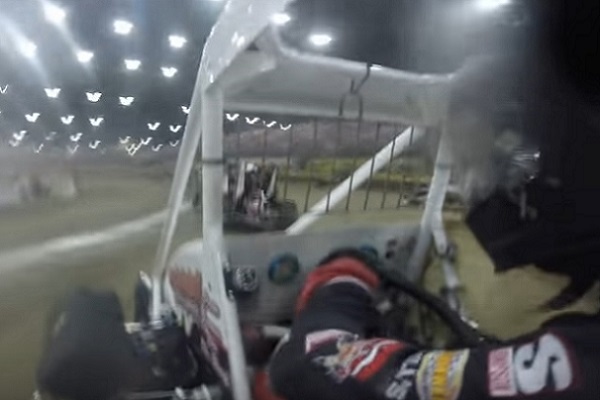 Tuesday - January - 2017
Contact:
Tommy Goudge Communications
tgoudgecommunications@gmail.com
Twitter: @TommyGoudge
London ON Canada
Attached Photo:
FOR IMMEDIATE RELEASE:
CORY TURNER MOTORSPORTS: TULSA TEACHINGS
by Tommy Goudge (January 30, 2017) – Caistor Centre, Ontario – Cory Turner made his debut in both the Chili Bowl Midget Nationals, and in a Midget car this month. Now his attention is back on getting ready for the rest of the 2017 season with the Hill’s Racing Sprint Car team.
Cory’s week in Tulsa came with some adversity, but he also learned a lot and is already working on plans for going back in 2018. As one of the tallest drivers in the pits, getting properly fitted in the car was the first order of business.
“We flew into Tulsa on Saturday night and when we first drove by the Expo Centre I couldn’t get over how big it was!” Cory exclaimed. “The next day we got to check out the track and get fitted in my Sean Dodenhoff-prepared Midget. I am usually pretty tight in my Sprint Car, but this was a far tighter fit than that.”
Monday’s practice session helped Cory to get acclimated to a new car, team, and of course the unique venue.
“I got to make some laps on a very slick track before my next session on a track that was freshly prepared,” Cory noted. “I wasn’t scheduled to run until Wednesday night, so I was able to take in some of the action on Tuesday and try to learn how the track changed over the course of a race night.”
Wednesday finally arrived, and found Cory drawing a starting spot inside the fourth row for his heat race.
“Not ideal, but lucky for us they use the passing points system,” Cory observed. “I was able to get underneath a couple of guys early in the race to move into 5th before a mid-race caution. On the restart the guy running in front of me had been running the bottom of the track the entire race, so I figured he would go there on the start as well.
“I guessed correctly and I tried to drive around him, but it wasn’t enough – the 6th place car of Gary Taylor got underneath me and I ended up losing a spot. I finished the race right on their bumpers but still in 6th place.”
The heat race result lined Cory up 7th in the C-Main with only four transfer spots available, and a very tough field to contend with.
“The race had numerous cautions,” Cory noted. “I had an opportunity to race with the two time and defending Chili Bowl champion Rico Abreu. It wasn’t textbook, but I was able to follow Rico to the front and grab the last transfer spot!”
Cory started 16th in the B-Main, and he started moving forward until things came to a screeching halt after a late-race restart.
“We got off to a great start, passing multiple cars and almost cracking the top ten midway through the race. A caution came out with four laps to go. I wanted to try to make up another couple spots as it would put us in an E or an F Main on Saturday.
“I got through turns one and two nicely on the restart, but then coming out of turn four I hooked the inside berm and went for a wild ride! I flipped end-over-end about three or four times. It was a pretty hard one, and really surprised me more than anything, as I had run that line multiple times that night.”
The crash spelled the end of Cory’s first Chili Bowl, but he learned a lot and is already looking forward to trying it again.
“We broke a fitting on the oil tank, and we were worried the engine had sucked air into it while it was still running upside down after the flip. As a team we decided not to risk the engine on Saturday, and packed up.
“As this was my first time in a Midget, as well as my first time ever stepping foot in the Tulsa Expo Centre, I was more than impressed by our team’s performance throughout the week. We were just starting to gel! I was getting more comfortable in the car each race, and I was pretty happy with the progress we made. I cannot express how grateful I am for all of the good luck and good job texts, phone calls, facebook posts and messages, and tweets and messages on Twitter.”
Cory will now get back to work preparing for his 2017 Sprint Car season with the Hill’s Racing Team. The first place to see Cory’s #97 will be at the Motorama show in Toronto coming up in March. On-track activity will start soon afterwards, and Cory is chomping at the bit to get going.
“Our goals this year are nothing short of winning multiple features, and a championship at the Ohsweken Speedway. This – my second year with the Hill’s Racing Team – will be our breakout year. We ended 2016 on a high note, as one of the cars to beat night-in and night-out in the months of August and September.”
LINKS
Website: www.CoryTurnerMotorsports.com
Twitter: @CTMotorsports_
Facebook: search “Cory Turner Motorsports”
MAILING LIST
Send an e-mail to tgoudgecommunications@gmail.com with “Turner” in the subject line to get on the Cory Turner Motorsports mailing list.
CORY’S CREW
Cory would like to thank KT Tobacco, Aces Bar & Grill, Insta-Panels, Braemar Building Systems, Silo Wireless, Gale’s Auto Aftermarket, Skyway Lawn Equipment, Pyett Spring & Alignment, DSE Performance, Six Nations Bingo, Malabar Super Spice, JNE Recovery, V&R Recycling, Plazek Auto Recyclers, Hauser’s Pharmacy, KT Gas & Convenience, The Truck Toppers, CJ Mulholland Mattress Factory, Rondex, Silverdale Gun Club, Barlow Farms, Mike Morris Holdings, Bryan’s Farm Supply, Total Coatings, Hitchman Trailers, V&R Hose & Hydraulics, RCM Racing Equipment, Top Flight Wings, Tetra-Chem Industries, Wix Filters, Creative Edge Signs & Graphics, and ImageFactor.ca