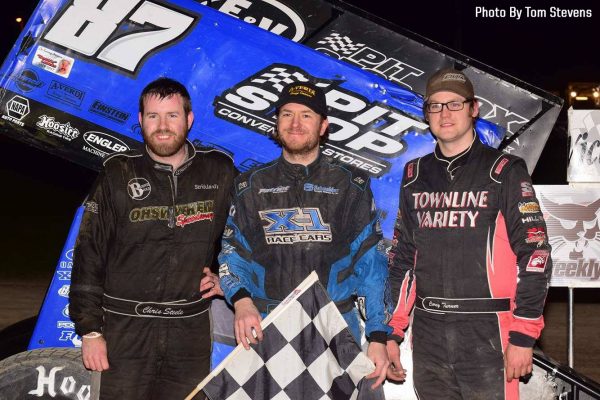 CAISTOR CENTRE, Ont. – April 25, 2017 – Cory Turner jump-started his 2017 season with a third-place podium finish in his first race of the year during Merrittville Speedway’s Spring Sizzler for the Patriot Sprint Tour on Saturday.

Turner had a strong KT Tobacco No.97 throughout the night against a tough field of Patriot Sprint Tour invaders and local challengers. He raced from fourth to second in his heat race, which qualified him for the top-eight redraw.

“I think the redraw makes or breaks your night,” Turner said. “If you’re not in the redraw, its very difficult. Whatever you pull in the redraw is luck. As long as you’re in it, that’s all you can do.”

Turner pulled the sixth-starting spot for the main event and quickly raced to second to challenge Chris Steele for the lead. A red flag midway through the race eliminated an advantage over third-place runner and eventual winner Jason Barney, forcing Turner to a strong third-place finish.

“The red was a long one and my bleeders bled out a little bit. The car was really tight afterwards,” Turner said. “If there hadn’t been a red, I don’t think (Barney) would have caught me or Steele. He was about a straightaway behind us.”

Overall, Turner was happy with a successful opening race to the season that offers a sturdy building block for the 2017 campaign.

“I was pretty pumped with how we ran,” Turner said. “I didn’t really have any expectations going into the night, but I was pretty pleased we were as fast as we were.”

Turner was also pleased with how the car responded to new changes, a positive sign for a driver who plans to race at a variety of racetracks through the upcoming year.

“We were pretty good in practice the week before,” Turner said. “I thought about it during the week and there were some things in practice that I wanted to try. I tried them in hot laps and it seemed pretty good. We rolled out fast in hot laps, we were good in the heat race and we drove forward in the feature against a really good field of cars.”

Turner and his Hill’s Racing team hope to be in action again this weekend at either Fulton (NY) Speedway on Friday, April 28 with the Empire Super Sprints or Fremont (OH) Speedway on Saturday, April 29 with the N­RA Sprint Invaders. Both entries are weather dependent.

“I’ve been (to Fulton) a couple of times and I really liked it,” Turner said. “I was there one time and it was hammer down. The next time it was slick top to bottom. You never really know what you’re going to get.”

Fremont, however, would be a new track for Turner.

“It looks like a flat Humberstone,” Turner said, comparing it to the Port Colborne, Ont. track. “It’s a real slick track where you have to come down and dump the car (into the corner) and try to drag race off.”