Cory Turner Looking To Rebound From Upside Down End To June 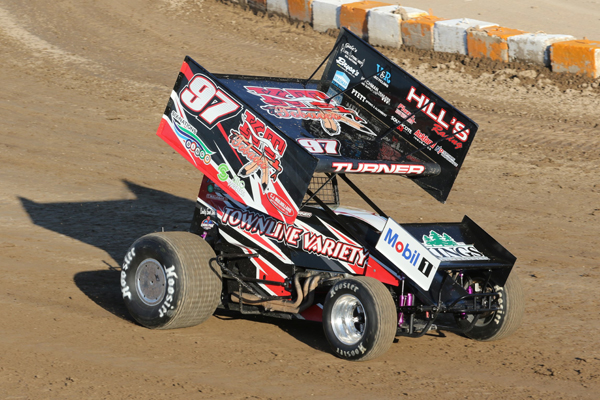 CAISTOR CENTRE, Ont. – July 3, 2018 – After scoring his first win of the season two weeks ago, Cory Turner suffered the pain of defeat this week during 360 Sprint Car action at Ohsweken Speedway. A tough week for Turner saw him upside down to end his night and a finish outside the top three at his home track for the first time this season.

The night started with a second-place finish in his heat after starting on the pole. It was enough for him to make it into the redraw though and earn a starting spot among the top eight for the main event.

“I just stumbled a little bit and didn’t get to turn one before Jimmy (Huppunen), so I just coasted around behind him and ran second,” Cory said of the heat race. “It was still good enough to put us in the redraw and we got left the three pill.”

The third starting position looked promising for Cory in the main event after he showed speed in his heat, but disaster struck on the opening lap. In turn three, Cory raced to the bottom lane and made contact with the inside retaining wall, sending his No.97 flipping.

“We got a good initial start in the Feature and just cuffed the wall in turn three and flipped,” Cory explained. “I was trying to drive off the blocks and then let the car go to the top of turn four because there was some good stuff there that I saw when we were driving around under the four wide. That was totally self-inflicted.”

In the immediate aftermath, frustration was the feeling for the veteran driver from Caistor Centre, but Turner has already bettered himself and realized the source of his mistake.

“I’m mostly just mad at myself,” Turner said. “I shouldn’t have cut it that close, that early in the race. I should have given myself more room. I’ve done that 50 times and sometimes when you think you’re going to hit it, you miss it by two inches, but that time I hit it.”

Turner and his Hill’s Racing Team have already assembled a new car for a return to action thanks to the support of his dedicated crew and marketing partners. The team hopes to continue their early season speed when they return to the track on Friday, July 6 at Ohsweken and plans to compete on Saturday, July 7 as well with the Southern Ontario Sprints. For additional event information, visit www.ohswekenspeedway.ca and www.southernontariosprints.com.