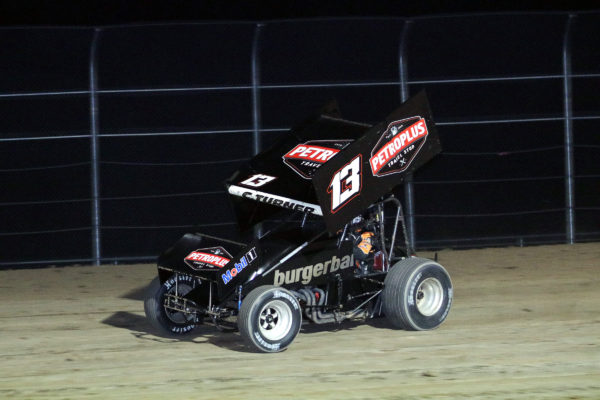 CAISTOR CENTRE, Ont. (September 12, 2019) – Cory Turner is gearing up for the biggest race of the season at Ohsweken Speedway, the $10,000 USD-to-win Canadian Sprint Car Nationals on September 13-14. Turner enters the largest event on his schedule after his second best weekend of the season where he debuted his new Petroplus/Burger Barn/Mobil 1 No.13 ride and scored back-to-back runner-up finishes at Ohsweken Speedway and at Merrittville Speedway with the Southern Ontario Sprints on September 6 and 7, respectively.

“We were pretty good Friday night,” Cory said. :That was the first night out for a brand new car and it worked pretty well. We won our heat race after starting fourth and finished second after starting second in the Feature.”

Early in the race, Turner slipped back to third, but then made a pass off a restart to get past Dylan Westbrook for second. Then in the second half of the race, Turner held off Westbrook and Mack DeMan to score the runner-up result.

Then on Saturday, Turner has a good start to the night with a second-place finish in his heat before driving from sixth to second in the main event.

“We had quite a few cautions,” Turner said of Saturday’s race. “By lap 14, I got to third, but with the lapped cars in he had a full straightaway on us within a lap. After that I was able to get by Shawn Sliter to run second.”

“I was really happy for him,” Turner said of his brother’s title. “I’m really proud of our Burger Barn Racing and Team Turner Racing group for getting another SOS championship with my brother.”

Now, Cory has switched his attention to the Canadian Sprint Car Nationals. After qualifying for Saturday’s A-Feature in three of the last four years against more than 60 cars each time, Turner believes he and his team have the tools and talent to finish at the front of the field this year.

“We’re really crossing our Ts and dotting ours Is,” Turner said. “We want to be really prepared for Friday with it being Burger Barn sponsor night and the triple 15s. We’re hoping to have a really good run that night and then a bit of luck Saturday. First of all we want to make the A-Main and then have a good run in it.”

The key to a successful chance at a Canadian Sprint Car Nationals win is a strong heat race, Turner said. With so many talented drivers in each heat race and only three qualifying spots in the A-Feature from his heat, there’s no time to waste.

“If you don’t run well in your heat race, you can get buried in a B or C-Main,” Turner said. “If you don’t time well, you can still race into the top-three and maybe get in the dash. It’s pretty much all about the heat race. It will determine where you start in the A-Main or if you even make it. You have to be on it right from the start. You can’t let the cars string out. You can’t waste any time. It’s all out from the drop of the green.”

For Turner, the Canadian Sprint Car Nationals are a culmination of the hard work he and his team have spent developing their racing program since May. It’s also a chance for the team to measure themselves against other teams.

“I look forward to Nationals weekend every year,” Turner said. “We get to race against the best of the best for 360 drivers in the Northeast. It’s a good gauge of where you’re at as a team. I think our team is at a point where we can run in the top-five or top-10.”

The Canadian Sprint Car Nationals kicks off on Thursday, September 12 with test and tune night prior to the first on-track competition with the Burger Barn Night Before the Nationals on Friday, September 13 where three drivers will earn guaranteed starting spots of 11th or better for the 35-lap main event at the 15th annual Canadian Sprint Car Nationals presented by Arrow Express on Saturday, September 14. For additional event information, including gate times and ticket information, visit www.OhswekenSpeedway.ca.