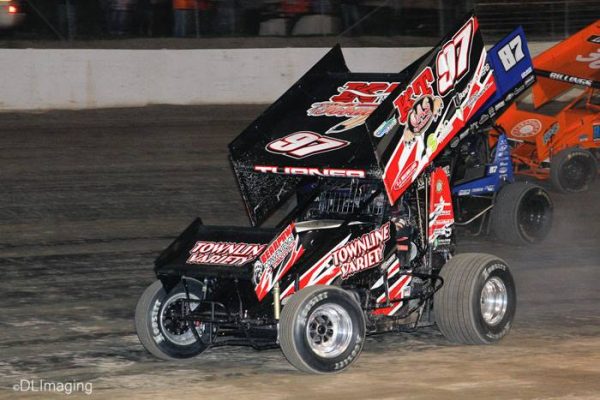 CAISTOR CENTRE, Ont. – April 29, 2017 – Cory Turner rattled off his second-straight podium finish in his second race of the season with the Lucas Oil Empire Super Sprints at Fulton Speedway on Friday night. Turner finished a strong third in the 25-lap main event behind winner Chuck Hebing and runner-up Danny Varin.

The night started with a strong time trial effort for Turner, who was second fastest in the fourth group. The effort placed him fifth on the starting grid for the 10-lap heat race and Turner was faced with a task of racing forward into the top-three in order to qualify for the redraw. He did just that with a third-place finish.

“We were good in hot laps and we started fifth in the heat race,” Turner said. “We ran down Joe Trenca with a couple to go. I knew that was the redraw spot. If you don’t get there, you’re in the dash and you’re starting 13th to 16th, so that was important.”

Making the redraw was crucial for Turner as he drew the pole starting spot and lined up with Hebing to his outside. Hebing took the early lead, but Turner kept pace in second while battling to maintain the spot with Jason Barney.

“We had a really good car,” Turner said. “I could really turn it early and then it wanted to stay down on the implement tires. I could get a good run and there was some good moisture out of turn two and turn four. If you slid up past it, you just spun the wheels. It was like ice.”

A caution on lap eight created the only double-file restart of the race. Turner and Hebing crisscrossed on the restart to find their preferred lines. Turner held on to second again until Danny Varin made a charge forward on the very slick track. Varin took the second spot at the halfway point, but not without Turner battling back on the bottom of the track.

Late in the race, Turner battled a surging Bryan Howland to maintain the third spot. Smooth, consistent laps at the bottom of the track allowed Turner the strong run and to hold on to the final podium spot.

“When you see those guys drive in above you, you have to stay calm and really try to hit your marks,” Turner explained. “You know they are driving in a lot harder, a lot deeper than you are and you can see them out of the corner of your eye. You just really have to stay focused and try to drag race them off the corner.”

The experience on a hard and slick New York racetrack early in the season is valuable for Turner. The Empire State is known for its smooth, but incredibly dry slick racetracks and Turner plans to tackle them regularly in 2017.

Cory Turner hopes to be in action next Friday, May 5 at Limaland Motorsports Park with the NRA Sprint Invaders. Following that, Turner will be at Ohsweken Speedway’s Test and Tune on Friday, May 12 before the tracks 22nd season opener on Friday, May 19.