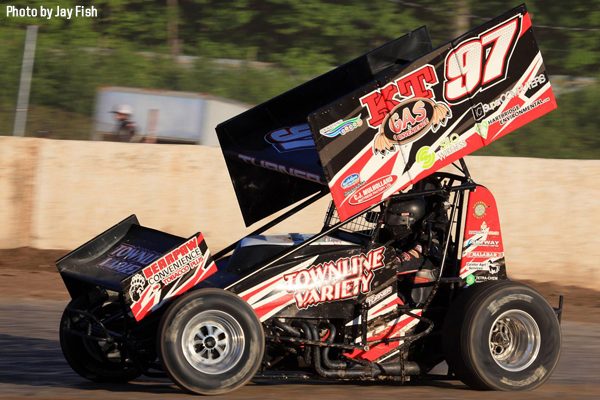 Cory Turner races down the backstretch during heat race action at Fulton Speedway on Saturday, June 3. (Photo by Jay Fish).

CAISTOR CENTRE, Ont. – June 5, 2017 – Cory Turner recorded another busy weekend of racing that saw the driver of the KT Tobacco/Silo Wireless No.97 Sprint Car record his first podium finish of the season at Ohsweken Speedway on Friday night.

Racing at his home track, Turner raced to a third-place finish in his heat race. While the car was fast, Turner felt he could have improved on the result.

“We had a really good night on Friday,” Turner said, “but I wasn’t good in the heat race at all. We went second back to third. I was quick time in Hot Laps and I just didn’t adjust enough for the track and I missed the setup.”

Regardless, Turner’s finish was strong enough to place him sixth on the starting grid for the 20-lap main event and he quickly raced into the top-three behind his brother Ryan. As Cory began to chase his brother for the second position, the handling on the car changed significantly. Cory was forced to work to maintain his third position and narrowly held the spot at the finish.

“I was running Ryan down for a while,” Cory said. “I was feeling the car losing a little bit of drive. The car was still pretty good and I just hung on for third. I beat Dylan Westbrook by about three feet at the line.”

The following night, Turner and his Hill’s Racing Team travelled to Fulton Speedway for a battle against the Patriot Sprint Tour. After a second-place result in the Heat, Turner finished third in the Dash behind defending series champion Jared Zimbardi and Fulton track champion Larry Wight. The result put Turner 11th on the starting grid for the main event.

“I didn’t get the best start, but we were definitely going forward,” Turner said. “We caught a caution on lap 10 and my brakes went away. I started to feel them go away so I tried to pump them to get the pedal back. I pumped them and they weren’t too bad, so I drove into turn one pretty tame. By turn three I had nothing, so I coasted around and got off the track.”

The brake issue was an unfortunate end to Turner’s night, which likely would have resulted in a top-10 finish.

“I’ve never had that happen,” Turner said. “Looking back at it, it wasn’t a Patriot Canada or an Ohsweken show, so it’s almost lucky it happened there. We got out of it unscathed.”

Despite Saturday’s issue, Turner is focusing on the positives from his team’s strong start to the 2017 campaign that now includes four top-five finishes in six races.

“It’s a really good start.” Turner said. Two top-five and one podium, so we’re pretty pleased by it.”