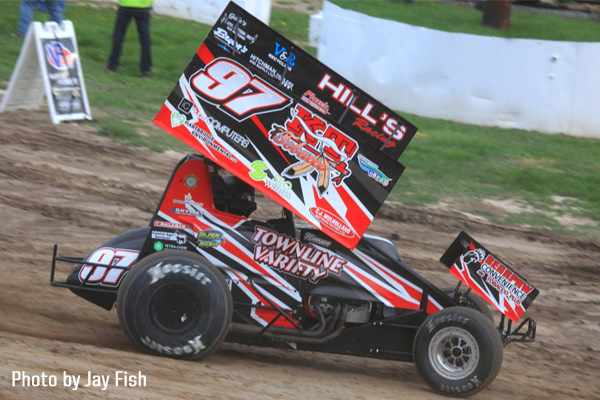 CAISTOR CENTRE, Ont. – October 26, 2017 – Cory Turner’s 2017 season recently came to a close when the driver of the KT Tobacco/Silo Wireless No.97 Hill’s Racing ride earned an eighth-place finish during Brockville Ontario Speedway’s Fall Nationals. The result was Turner’s 22nd top-10 finish of the season in 31 starts aboard his 360 Sprint Car.

Turner was fast all night at Brockville. He set fast time during the hot lap session before timing quickest in his heat race group. A two-car invert put him outside the front row for the heat race and he drove to a second-place finish.

“I’ve never seen it that fast in my life,” Turner said of the Brockville track. “We were quick time overall in hot laps at 12.1. It was heavy and hammer down, even in the Feature. The air was really heavy and it just never slicked out. Had the air been colder, we would have went even faster.”

Turner drew the 10th starting spot in the 12-car redraw on the narrow, but lightning fast Brockville surface. Already a difficult track to pass on, Turner felt it was even more difficult given the circumstances of the race along with the speed of the track.

“They had double file restarts all night and when one guy doesn’t fire right, it hurts that whole row,” Cory explained. We got the short end of the stick once on a restart. We went tenth to eight, but I felt if we started in the top-six we would have run third or fourth. We were definitely a top-five car.”

After a three week layoff before competition at Brockville, Turner was quite happy with how his car ran at Brockville. The strong run was a solid close to the end of the season. Prior to Brockville, Turner had only raced once since the Canadian Sprint Car Nationals. That start came in late September at Outlaw Speedway in Dundee, NY where Turner earned a 12th-place result against a tough 38-car field.

“We were good that night too,” Turner said of the Outlaw race, “we just had a long red and the right-rear bled out. We were up to sixth and then faded. That was a tough show too, with 38 cars.”

In all, Turner was quite pleased with his 2017 campaign. It was by far Turner’s best numbers season of 360 Sprint Car racing to date and included a win, 15 top-five finishes and 22 top-10 results in 31 starts. Turner also finished fourth in weekly points at Ohsweken Speedway.

Turner was also quick to thank his sponsors, team members and supporters for their efforts that made his 2017 season so successful. Turner and his team are already eagerly working towards the 2018 season to improve on their record setting year next summer.