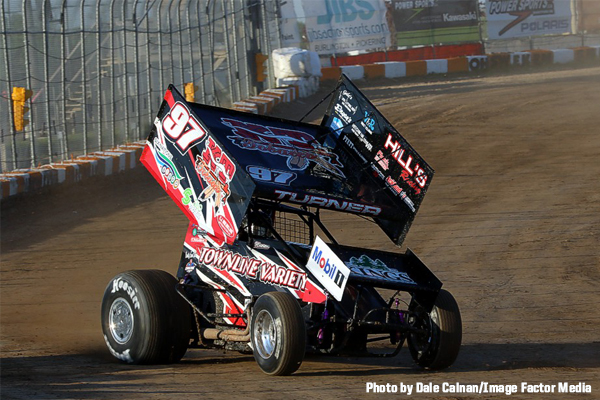 Cory Turner drives his No.97 Sprint Car into turn three at Ohsweken Speedway on Friday, May 25. (Photo by Dale Calnan/Image Factor Media).

CAISTOR CENTRE, Ont. – May 30, 2018 – Cory Turner was back in action behind the wheel of his No.97 KT Tobacco/Silo Wireless 360 Sprint Car this weekend for a trio of events. Turner earned his second-straight second-place finish during weekly competition at Ohsweken Speedway on Friday night, before visiting the Buckeye State for a pair of events.

Turner battled with K&L Ready Mix NRA Sprint Invaders on Saturday night at Fremont (OH) Speedway and Sunday night at Waynesfield (OH) Raceway Park where he picked up valuable experience in one the biggest Sprint Car hot beds in the United States.

On Friday night, Turner picked up a win in heat race action to qualify for the redraw and then pulled the fourth starting spot for the 20-lap main event with the Kool Kidz-Corr/Pak 360 Sprint Cars. Turner immediately made his way into third. After Dylan Westbrook took over the lead, Turner took second from Hendricks and then set out to take down Westbrook.

He got his best chance on a lap nine restart when he stayed with Westbrook for several laps, attempting to pass the No.47x on the outside. With the bottom lane the preferred groove, Turner was unable to make the pass and settled for second.

“I was really happy with the car,” Turner said. “On the restarts, we were all over him. Then he moved up in to our lane and I pushed in one corner and he got probably 8 to 10 car lengths that corner and I couldn’t get back to his tail tank again.”

While the Turner would have certainly preferred to win for the second time in his career at Ohsweken, he’s happy to start the year with two solid second-place finishes.

“Second two weeks in a row, it’s not winning, but you’re right there,” Turner said. “I’m going to take a new approach this year and not look at the points. I’m just going to go there and try to win races. If you win enough races, the points will take care of themselves.”

After Turner and his Hill’s Racing teammates helped perform overnight maintenance, the team loaded the car Saturday morning for a trip to Fremont Speedway. It was Turner’s first career appearance at the 1/3-mile oval and he timed 17th fastest against a tough field of cars in his first-ever laps around the track.

He went on to finish fifth in his qualifying heat, which set him into the 14th starting spot for the main event. On the opening set of corners, Jeff Williams got into Turner’s right front and sent the No.97 spinning to the infield with a bent front axle, ending the night early.

“We didn’t time in near as good as we should have,” Turner explained. “We were decent in the heat race, but it was the sloppiest track I’ve ever been on. I got a shield full of mud a couple of times. In the Feature, two guys got together and came down the track, cuffed my right-front and knocked the front-end out.”

Following repairs and an overnight wash, the team then ventured another hour south on I-75 to Waynesfield Motorsports Park, a high-banked 1/3-mile bullring that Turner ranks among his all-time favourite racetracks. After qualifying 22nd quickest, Turner had his work cut out for him to qualify into the main event. Turner ended up sixth in his heat, two spots short of a transfer position and had to run the B-Main.

In the B-Main, Turner started sixth and was tasked with making his way up to fourth. He made a couple of early moves and then took fourth on lap six to move into a transfer spot. Unfortunately, a hard-charging Butch Schroeder came from the back to steal the spot from Turner in the closing laps, forcing Turner to fifth, one spot outside of a position in the show.

“It was definitely a learning experience,” Turner said. “I’d like to go back in June. I haven’t had much success there, but it’s still one of my favourite racetracks. It’s wide, it’s racey and it’s a real driver’s track. I think learning what we learned, it’s going to help us if we ever go to any of the ASCS National Events or even if we go to Eldora at the end of the year on that same tire. It’s going to make us a lot better.”

Turner will be back in action on Friday, June 1 at Ohsweken Speedway. NASCAR legend Ken Schrader will also be in attendance with the UMP Modifieds. For additional event information, visit www.ohswekenspeedway.ca.