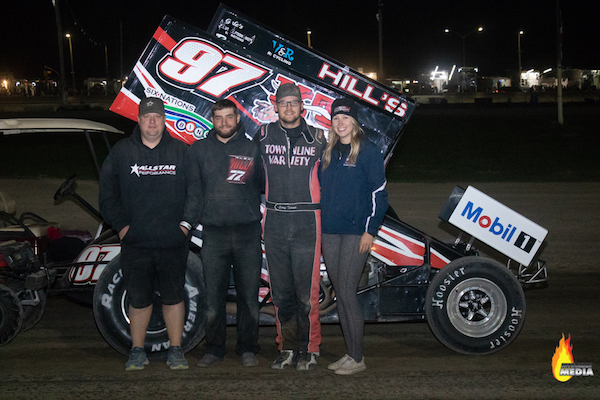 CAISTOR CENTRE, Ont. (September 11, 2018) – Cory Turner finally got to enjoy the fruit of the season’s labour when he officially earned the Southern Ontario Sprints 2018 championship with a fifth-place finish in KT Gas & Convenience/Silo Wireless No.97 on Saturday, September 8 at Merrittville Speedway. The championship is the first of his Sprint Car career.

Turner and his Hill’s Racing/Cory Turner Motorsports team finished sixth or better in each of the eight races on tour, including a win at Brighton Speedway on July 7, which was one of five podium finishes and six top-fives.

“It’s pretty cool,” said Turner. “We were the most consistent team. I only finished outside the top-five twice. It feels good now that we got it done. Our team worked hard at the Hill’s Racing shop until 3am every Friday and then came back and thrashed in the morning to go wherever we were going with the SOS. We are very privileged to have their support. I can’t thank our car owners Miles Hill and Pam Thomas our crew and our partners enough for their support. We’re pretty pumped to be the 2018 SOS champions.”

Saturday’s race was not easy on the Caistor Centre driver’s nerves as he looked to pilot his Townline Variety/Mobil 1/King’s Wood Products No.97 to the SOS title. Entering the race, Turner needed only a finish of 12th or better to guarantee the title over brother Ryan Turner. Cory worked hard to keep his nose clean and drive to a fifth-place finish on a very slick Merrittville surface.

“The championship came down to the last race,” Turner said. “Once we took the white flag, I felt good because I knew there were guys laps down and we couldn’t finish last. My brother had been running second and third all night and he was really good. We fell back to seventh at one point before I got back to fifth.”

“We were running down my brother and Dylan Westbrook in traffic late in the race,” Turner continued. “With a little bit of luck, I think we could have been on the podium. A top-five still feels good after we ran clean. We were pretty happy with the car late in the race.”

The top-five finish at Merrittville followed an eighth-place run during the final points night for the weekly Kool Kidz-Corr/Pak series at Ohsweken Speedway on Friday, September 7. When the dust settled, Turner finished third in the weekly standings at his home track.

“I had a tough heat race with Hafertepe and Kreutter in my heat race, “ Turner said. “I got the jump on my brother and took the lead. We led the first four laps until Sam gave me a big slider. I was pretty happy we beat him for four laps. Then the caution came out and Kreutter slid me and I slid him back, but I just didn’t get around him. I was probably just as fast as him and I don’t think he would have got me without the caution.”

Turner third-place finish after starting second in the heat meant he missed the redraw by one spot and started ninth for the 20-lap main event.

“I got pinched off on lap one and fell back to 13th,” Turner said. “We started rolling around on the top and got back up to eight before we had a caution with four to go. We nearly went from 13th to sixth in about 15 laps, so I was pretty happy with the car.”

Now, Turner has turned his focus towards the 14th Canadian Sprint Car Nationals at Ohsweken on Friday, September 14 and Saturday, September 15. Saturday’s $10,000 USD-to-win and $1,000 USD-to-start race is the pinnacle of 360 Sprint Car racing in the northeast and is the event Turner builds towards all season long.

“We have been getting better and better on the slick tracks all year, so we are looking forward to an ultra-slick surface on Saturday at the Nationals,” Turner stated. “The Nationals is our Crown Jewel race. We work all year for it, so we want to make sure we get in the show and then work from there. We transferred through our heat race last year, so I’d like to do it again this year.”

Currently, the entry list for the 2018 edition of the Canadian Sprint Car Nationals sits at 68 cars. Turner will be vying for one of 30 spots in Saturday’s 35-lap A-Feature. For complete event details, visit www.ohswekenspeedway.ca. For more information on Cory Turner Motorsports, visit www.coryturnermotorsports.com.