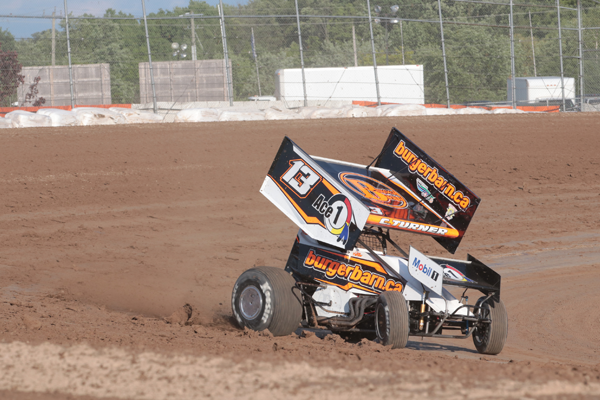 CAISTOR CENTRE, Ont. (June 25, 2019) – Cory Turner battled to a pair of top-10 finishes during a doubleheader weekend that saw his Burger Barn/Ace 1 Construction/Mobil 1 No.13 360 Sprint Car in action at Ohsweken Speedway on Friday and at Merrittville Speedway with the Southern Ontario Sprints on Saturday.

The weekend started with a drive from sixth to second in the heat race Friday night before starting fifth in the main event. Unfortunately for Turner, the front wing collapsed almost immediately following the green flag.

“I still got up to challenge for second (after the wing collapsed) and then it twisted on me and started digging into the left front,” Turner said. “I went to the bottom and just drove to get points after that. We had a really fast car and if the front wing would have stayed up, I believe we had a car capable of a podium finish.”

On Saturday night, Turner was back in action with the Southern Ontario Sprints for the second straight week. After a quick hot lap session, Turner earned a second-place finish in his heat. Then come Feature time, Turner tried to race forward, but admits he missed the setup.

“We were good in Hot Laps Saturday, good in the heat race and I just totally tightened the car up way too much for the Feature,” Turner said. “I had the extreme slick setup in it and it just wasn’t that slick. I was back to 12th at one point and got back to ninth. I got better as the race went because it dried out, but it was ugly for about the first 15 laps.”

The ninth-place finish makes a streak of seven straight top-10 finishes for Turner. The streak is a sign for Turner and his team that things continue to trend in the right direction. Further proof is that Turner sits in the top-five in points both at Ohsweken and with the SOS.

“We’re right in both of the points races,” Turner said. “You can’t win them in the first five weeks, but you can certainly lose them. We’re right there and our car is good. We have two wins and last year I only had two all year. Hopefully that’s a sign of things to come. It was a little bit of misfortune this weekend and a mistake on my part, but other than that we’re in good shape.”