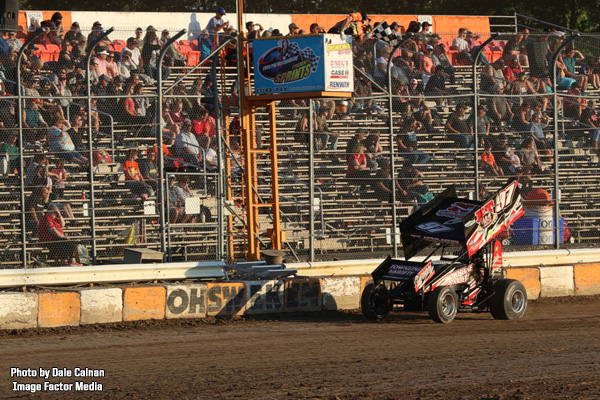 Cory Turner races to the checkered flag in his Heat Race at Ohsweken Speedway on Friday, July 21. (Photo by Dale Calnan/Image Factor Media).

The weekend started with the weekly stop at Ohsweken Speedway for the KT Tobacco/Silo Wireless No.97 Hill’s Racing ride. Turner was quickest in Hot Laps and won his Heat Race from the pole, but struggled in the 20-lap Kool Kidz-Corr/Pak Sprint Car Feature.

“We were really good in the Heat Race. We started on the pole and won easily,” Turner said. “I think we just tightened the car up way too much for the Feature. We still ran ninth, but we were not near as good as we needed to be.”

The team then worked late to prepare for a trip east for the second race of the season with the Patriot Sprint Tour at Brockville Ontario Speedway. Cory was much improved from his June trip to the BOS as he drove to a third-place finish in his heat.

“I was wide open all the way around and it’s the first time I’ve don’t that there,” Turner said. “In the Heat Race, we went from fifth to third. Rick Wilson and my brother Ryan were in front of us and we ran them down. I thought we had a good a car.”

Turner made the redraw for the main event, but pulled the seventh starting spot. That left a difficult path to the front of the field and Turner was up for the challenge.

“We drew seventh again. We have to find somebody with some luck to draw,” Turner said. “We drove from seventh to fourth and were all over Poirier late in the race for third. I’m not saying we would have won, but we definitely would have been on the podium if we had a better starting position.”

The team then continued further east to Cornwall Motor Speedway for a second-straight night of action against the Patriots. Turner raced to a third-place finish in his heat.

“At Cornwall in the Heat Race I had Poirier and Zimbardi ahead of me. I checked out on the guys behind me, but I didn’t have anything for those guys,” Turner explained.

With inclement weather approaching, the track and series rushed through the rest of the program to ensure the Sprint Car Feature would be complete. Turner was quick to credit his crew for their swift action to prepare the car for the main event.

“I’ve never been rushed so much for the Feature,” Turner said. “We ran our Heats and we were up in another 20 minutes. Our crew did a great job. We changed bars and they worked their butts off to make the car better.”

Ultimately, Turner came home with a fifth-place finish at Cornwall in the main event to cap the weekend.

“We got in some lapped traffic and the leaders were coming back to me,” Turner said. “Then we had a caution with about 10 laps to go and I don’t know if my bleeders bled down too far or my tires sealed up, but I just didn’t get going again after that start.”

Turner came away from the weekend happy with his team’s performance. Mostly, it was a strong weekend of seat time for Turner.

“The racing does help,” said Turner. “You’re not learning anything by sitting at home Saturday and Sunday. It’s not Ohsweken, but it’s still dirt in a circle. You’re still learning things about your car and it all helps. It makes you sharper in the car and you feel better in your car.”

The pair of top-five finishes this weekend for Turner wrapped up the Patriot Sprint Tour Canada Series. Turner finished the mini-series third in points.

Now the team refocuses for three big nights of racing at Ohsweken. Friday, July 21 is Christmas in July and autograph night. Turner will have hero cards for fans during the on track autograph session. Then, Monday, July 24 the team battles some of the best 360 Sprint Car drivers in the Northeast as well as Rico Abreu and Kyle Larson at the Northern Summer Nationals. On Tuesday, July 25 Turner will take on the World of Outlaws Craftsman Sprint Car Series. For any additional event information, please visit www.ohswekenspeedway.com.